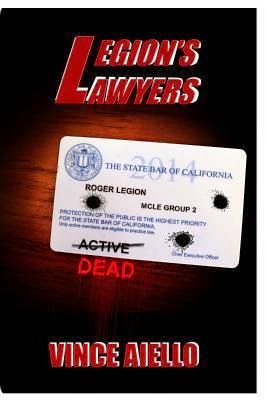 One of the questions that I am consistently asked about my writing is how I can place a character like Roger Legion, a lawyer who appears in three of my novels, in situations that allow him to be daring and dramatic, scary and fearless, and unstoppable. My answer is always that it is that challenge that draws me to be a writer.

Roger Legion is a realistic anti-hero lawyer. He is a great lawyer, but a terrible person. He is like a military general, who would take a bullet for his troops, but will never be questioned by any of them. He is a father figure that is impressed only by actions, not words. All the lawyers in his firm strive to be just like him.

A quick overview of my method is that I start with an action set piece. In Legion’s Lawyers, for example, I had the idea that on a normal work day, Roger Legion would be tipped off that a helicopter would be landing on the roof of his building within two minutes. The men in the helicopter were coming to kill him and his entire law firm. As you can imagine, a lot of action can flow from that premise.

Roger Legion is not a criminal lawyer, so it was necessary for me to come up with an economic reason that someone would be so upset with him that they would order the massacre of his entire law firm. All my stories are set in San Diego. Due to its proximity to Mexico and the suggested violence, a drug cartel became the natural organization to organize such an action. It allowed me to examine the ostentatious nature of a drug lord and teams of assassins.

I further infused a story line involving prescription drug abuse and a traitor within the law firm. After a two month planning period, the story of Legion’s Lawyers came together with the tag line, ‘Betrayal cannot be redeemed.’ Vince Aiello grew up in upstate New York before moving to Southern California where he attended California Western School of Law. He is admitted to practice law in both New York and California. LEGION’S LAWYERS is his third novel. His earlier novels, LEGAL DETRIMENT and THE LITIGATION GUY, were both acclaimed bestsellers.

LEGION’S LAWYERS, the latest thriller by Vince Aiello about the Legion law firm, dissects, in Aiello’s signature punchy style, the driving ambition within the firm and its deadly consequences. The firm’s head, Roger Legion, has appeared in Aiello’s previous books about the firm, LEGAL DETRIMENT and THE LITIGATION GUY. Readers have developed mixed reactions to Legion, who is both a brutal taskmaster and a great litigator. Love him or hate him, all look forward to his appearance in the story. Legion believes the courtroom is like a gladiatorial arena, where he will do whatever it takes to win.

Previous Legion books have dealt with a heist by lawyers and a terrorist attack on the Coronado Bay Bridge, in San Diego. In LEGION’S LAWYERS, Roger Legion finds himself the target of a drug cartel and more than one team of assassins.

Aiello writes books that are “screenplay-ready,” with tight scenes, strong dialogue, and a three-act structure. “I am drawn to authors who have also written for the screen,” Aiello says, citing such writers as Rod Serling, F. Scott Fitzgerald, and William Peter Blatty.

Aiello also writes a song for each of his books, which is featured in the story. The complete lyrics appear at the end of the books. For a scene in LEGION’S LAWYERS, Aiello composed a song titled “All I Know.” A music video is pending, but the song can be heard on YouTube at https://www.youtube.com/watch?v=Y11j7biCGus

The author’s combination of hard-boiled legal action accompanied by its own, built-in soundtrack makes for an irresistible reading, listening – and potentially viewing – experience.
For More Information


Legion’s Lawyers is available at Amazon.
Pick up your copy at Barnes & Noble.
Discuss this book at PUYB Virtual Book Club at Goodreads.
Watch the book video at YouTube.