Guest post by the author for A New World- Conviction

How do you research you books before writing them?


Thank you for having me here today, lets talk about the research that went into not only my newest novel Conviction (A New World-book 2), but how I approach research for all my works. To start, one thing that has always bothered me about certain books, and sadly certain writers, is the lack of research they do for their books. When I begin a new project, I task myself with doing as much research as I can on the subject I’m working on. Whether this is researching the subject on line or talking to experts or reading other people’s books. For my novel, The Calling, which is about vampires and witches I did a lot of research into the lore around both groups. I’m not saying I became an expert, but I did learn a lot and I enjoyed digging into the history and the origins of these creatures. For the sequel which I’m still working on, I needed to include a Native American character. For this new character I didn’t want to fall into any cultural stereotypes, especially given the nature of the story. I was thrilled when a fellow author who is part Native American, agreed to sit down with me so we could talk about my characterization. I got a lot of wonderful information and I’m looking forward to including this new character in that series.
Now for my epic science fiction series A New World, I had to do a lot of research into space, science, military, various governments from around the world, the UN, and technology. I have upwards of eighty pages of notes (including web links for more detailed information) and that is just for the humans. I looked up everything on what would happen to our planet if our neighboring star went supernova to how long it would take the US Military to quarantine the entire United States including our assets over sea. Since I wanted to go for a global feel for the series I dug into a lot of information on other countries as well, and not just the usual subjects. I had to research countries in Africa and in Eastern Europe. There is a fun bit about New Zealand in the series which took some research and a fun conversation with a friend there. My research wasn’t only on-line; I talked to friends in the military and at NASA and I reached out to people I know from other countries. I had this great conversation with a fellow author from the UK and she helped me rewrite a section that was based in the UK, because, according to her, Brits would never act how I showed them. We had a great conversation and a few laughs.
When it comes to research, I try to get as much information as I can to present the story as accurately as possible (especially the techy stuff), but I don’t want to bog the reader down with boring details because that information is no fun to read, and I’m not writing a science book. Still, I have all my research so that if people question me, I can answer them and provide the source material. I had one beta reader question some of my comments about our moon. So, I sent them the research I had done with the links and so forth, impressed that I had actually done my homework they appreciated that I wasn’t waving the magic sci-fi wand.
Don’t get me wrong, this is a sci-fi novel, which is part of a sci-fi series, I’m not a scientist, political scholar, or expert on alien life, so I do occasionally wave the magic sci-fi wand around, but now I like to think I do it in an informed and honest way. As much as research in a tool so is the magic wand we writers use to craft our stories. The key is to find the right balance so we don’t come off sounding like we just made it all up, because that hurts the credibility of our stories and makes us look lazy in our craft.


That is how I approach research for my novels, it’s a mix of reading, on-line study, conversations with experts and a little writing magic to even out the edges. When it comes to writing do your homework and have with it. The research you do at the beginning the easier and better the story will turn out. At least that’s my hope. 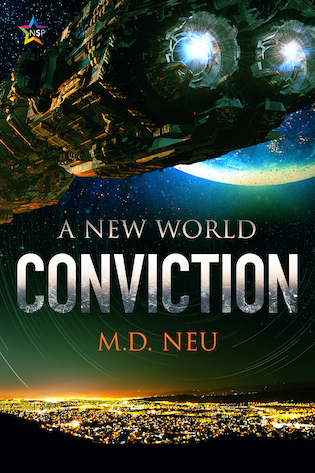 
A little blue world, the third planet from the sun. It’s home to 7 billion people with all manner of faiths, beliefs and customs, divided by bigotry and misunderstanding, who will soon be told they are not alone in the universe. Anyone watching from the outside would pass by this fractured and tumultuous world, unless they had no other choice.
Todd Landon is one of these people, living and working in a section of the world called the United States of America. His life is similar to those around him: home, family, work, friends and a husband.
After the attack on San Jose, Todd is appointed to Special Envoy for Terran Affairs by the nentraee, a position many world leaders question. Undeterred Todd wants to build bridges between both people. However, this new position brings with it a new set of problems that not only he, but his new allies Mi’ko and Mirtoff must overcome. Will the humans and nentraee learn to work together despite mistrust and threats of more attacks by a new global terrorist group, or will the terrorists win? Will this bring an end to an already shaky alliance between nentraee and humans?

Author Bio:
M.D. Neu is a LGBTQA Fiction Writer with a love for writing and travel. Living in the heart of Silicon Valley (San Jose, California) and growing up around technology, he's always been fascinated with what could be. Specifically drawn to Science Fiction and Paranormal television and novels, M.D. Neu was inspired by the great Gene Roddenberry, George Lucas, Stephen King, Alice Walker, Alfred Hitchcock, Harvey Fierstein, Anne Rice, and Kim Stanley Robinson. An odd combination, but one that has influenced his writing.
Growing up in an accepting family as a gay man he always wondered why there were never stories reflecting who he was. Constantly surrounded by characters that only reflected heterosexual society, M.D. Neu decided he wanted to change that. So, he took to writing, wanting to tell good stories that reflected our diverse world.
When M.D. Neu isn't writing, he works for a non-profit and travels with his biggest supporter and his harshest critic, Eric his husband of eighteen plus years.