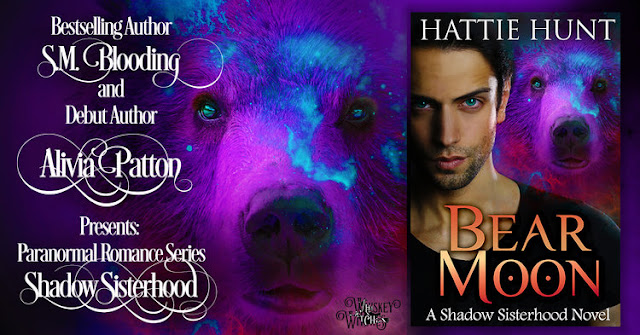 The gift of the padfoot cost Ripley Kent everything.

As a girl, she was chosen by the death dog. In one week, she lost everything. Her parents, her brother. Even her community of shifters shunned the power she sheltered.

She swore she’d never return to their prejudiced hatred, but when her uncle dies, Ripley is called back to Troutdale to settle his affairs. She thinks she can get in and get out unaffected, but Joe Elliott has other ideas.

He needs her, and it’s not in all the old ways her body remembers so well.

His twin brother has been bitten by a rabid wolf, and as the death glow overwhelms the town, Ripley’s padfoot gift explodes into the curse she’s always feared.

Ripley owes these people nothing after the way they’ve treated her. But that’s the thing with gifts. Sometimes they cost more to ignore. Love is only one save-of-the-day away. 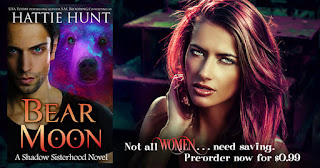 For The last year w have been dealing with the world of food allergies. We found out last September that my oldest son had a severe dairy allergy along with alot of outdoor allergis. Armed with an pi pen we startd to navigate this world. Next thing I know he starts reacting to things left and right. Now he is no peanuts, almonds, cashews, gluten, corn, dairy and peaches.

To add my 3rd child ( he is almost 6), gets severe migraines. After a few appoinments we found out that any dairy, gluten, msg, strawberris and nitrates are his triggers. If he has any of these, and we don't catch it with medicine fast, he is laid out for at least a day with a migriane.

I found out i have a mild dairy allergy and gluteen intolerances, as well as the msg, sulfaties and nitrates that trigger migrains.

So its been rough. My oldest just wants to be normal and eat like everyone else. So I try very hard to make foods for our family that he can eat to.

WHich brings me to the Tiramisu. I love baking and watching The Great British Bake Off. Its so awesome. My husband happens to love deserets, so it works well. I stopped baking for awhile dealing with all these changes.

A couple days ago we saw and pisode where they made a Tiramisu cake and I knew I had to mak it for my husbnd (his favorite desert besides pumpkin pie). After alot of research I found a sponge recipe and realized that I would have to make my own cream recipe.

So this is the Gluten Free Victorian Sponge Cake. I used soy mild and a gluten free flour blend I make. I also made it in a baking sheet since I needed to make layers

For the cream I could not find anything that didnt us nuts in some way. So i combined a bunch of different ones and tweaked it.

I broke up the Tofu and put in my nut milk bag to squeeze out the water. You can use cheese cloth or a dish towel. Then I added eveything to the blender and bleneded until smooth. I had to scrape it down a few times. If I had a food processor I woufl have used that.

Next thing I did was make some coconut whipped cream. I took 2 cans of cocont milk and put them in the fridge. After a few hours I opened the can and then scraped off the cream. I beat it with my hand mixer until it was whipped cream.

After I had the cream and cheese done, i mixed them together.

Then I started assembling. It went like this;
On the top You put the coffee on the sponge and do a crumb coat with the cream/cheese mix. Then add more of the mix and top with cocoa powder. 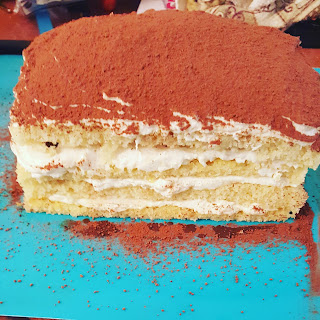 Not the prettiest but dang tasty lol.
For next time I wont be making the coconut whipped cream because of the coconut taste.
Also making sure the chocolate pieces are smaller and more coffee on all the sponge layer. 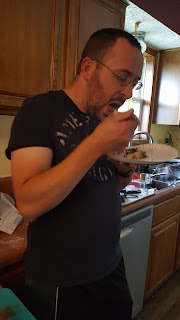 He is my non food allergy hubby eating his second piece for breakfast. He said it was really good for being allergy friendly.