We Go One Charity Anthology for Veterans Release Day 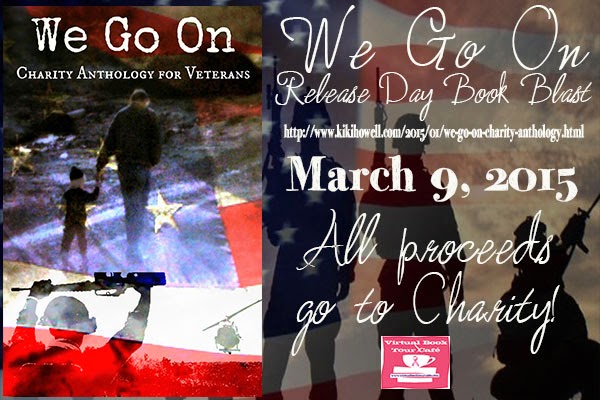 The poems and stories included in this anthology, written by various authors, tell of veterans outside of war, of how their sacrifice of service changed their lives long after the war was over. Although some of the messages of the sacrifices of war are sadly timeless, they speak of unsung heroes, and I say unsung because nothing we could ever do for them would ever be enough to say thank you for all they gave. With that said, with these poems and stories, we will give what we can. 100% of the profits made will go to charities for veterans.

To all who have served and to all of those who love them, we offer our undying gratitude because it is all we truly have to give you for your sacrifices, told and untold. So, we give what we can to honor you, to say thank you, and to, in some small way, give back. Although it could never be enough, a million thanks or a million dollars, we pray we can help some of the many who have given so much, so selflessly, and then suffered even as they fought another battle, the battle to go on…
Table of Contents:We Go OnAn Enemy That Haunts My Mind by Alan W. JankowskiWailing Wall by Judith Turner-YamamotoA Soldier’s Dream by Steve MorseNo Man Left Behind by Terry RozumWaging Peace by Kelly TalbotJust a Humble Hero by John HansenDead Man Walking by Robin MerrillThat Time We Brought Some Veterans Down to Mexico by Evan HarrisPost Traumatic Stress Disorder by Gregory RoordaThe Demons Will Someday Die by Shruti FatehpuriaTo Love Again by Anita StienstraJourney of a Hidden Life by Julie SeedorfShe - A Brutal Truth by Liberty Samantha MichaelThe Mind of a Shrimp by Robert E. BergmannExit Wounds by Lana BellaNot Perfect, Still a Hero by Jason W. HuschleShadows of the Past by SL BergFinding 'Peace with Honor' by Robert MorganA Soldier’s Cry by Kelley HutchisonComing Back To Life by Kiki HowellMy Dad, My Hero by Stephen QuinnWe Go On

Please help support this cause - All Proceeds Go To

Charity. You can help by purchasing the book, bravelets

or custom designs at the links below and share with

your friends and family.


Charities Include but are not limited to:

Project Homefront, PTSDCheck Some Fun Other Ways We’ve Come Up With In Our Crusade to Support

Veterans
All Profits Go To Veteran’s Charities!!!!Bravelets – Bracelets that remind to “Be Brave” with donations going to PTSD Awarenesshttps://www.bravelets.com/bravepage/we-go-on-charity-anthology-for-veteransGet The Anthology Cover on Shirts, Mugs, Buttons, etc at Café Presshttp://www.cafepress.com/kikihowell