Release Day Blitz for Flury: Journey of a Snowman 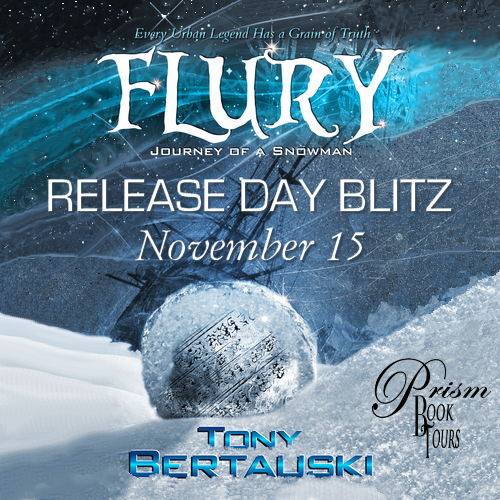 
We're celebrating the RELEASE of
Flury: Journey of a Snowman
By Tony Bertauski

An Introduction to Flury

Frosty had a magic hat.
There was no explanation, just a special hat that turned a pile of snow into a walking, talking best friend. Flury is more than that. And doesn’t smoke.
Born on the North Pole, Flury was created by an ancient race of elven that evolved during the Ice Age and continues to live in the polar ice today. Technologically advanced, they sustain themselves with innovation and wisdom. But even the most peaceful settlements encounter danger, such as polar bears. That’s why they invented abominables.
What we call snowmen.
The life of an abominable doesn’t magically spring from a top hat. The heart of an abominable is a metal orb—an intricately carved sphere that generates an electromagnetic field and builds a body of snow around it. Abominables are intimidating and selfless. They run, they fly. Above all else, they protect.
In the late 1800s, Malcolm Toye was part of an arctic voyage that ended in disaster. The survivors of the expedition never saw him again. Malcolm had wandered into the snowy landscape to be saved by a patrolling abominable he would come to know as Flury.
His rescue, however, became more of a curse than a blessing when the elven refused to allow him safe passage back home, insisting they remain secret from humanity. Malcolm was destined to live out his days among the elven, pining for home.
Longing for his wife.
Malcolm escaped by stealing the metal orb of Flury. Quietly, he arrived back in the United States to settle down and resume a normal life. But there was nothing normal about it. As the years went by, his estate becomes shrouded in mystery and rumors.
A hundred years will go by before the mystery is solved.
Oliver Toye, a teenage type 1 diabetic, will discover the magic hidden on his grandmother’s property. He’ll read about Malcolm Toye’s journey when he finds a set of leather bound journals. He’ll see the snowman trapped on the property, and the other things that haunt the forest. Most importantly, he’ll uncover Malcolm Toye’s master plan to harm others. And why he wants to.
Flury will come to Oliver’s rescue more than once.

Flury: Journey of a Snowman
(Claus #3)
by Tony Bertauski
YA Sci-Fi, Fantasy, Holiday