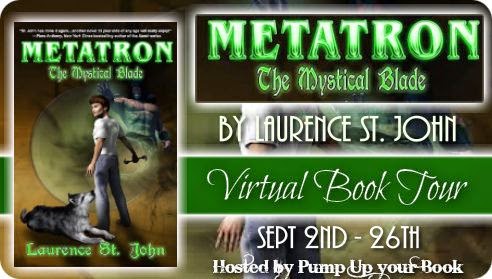 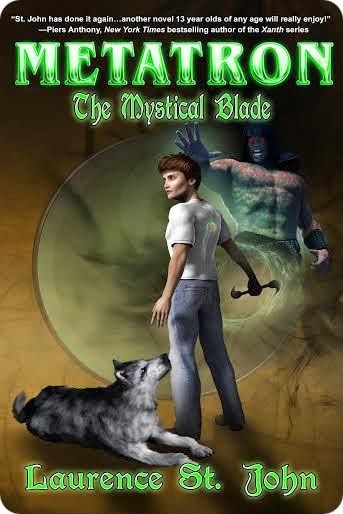 Thirteen-year-old Tyler Thompson is on the verge of becoming a superhero, but he must prove himself so he can earn the remainder of his superpowers and fulfill his destiny.

When his grandfather, Benjamin, is held prisoner at AREA 51, where the eternal powers are presumed to be hidden, Tyler attempts to penetrate the base’s heavy security. However, Dr. Mason Payne, the evil scientist who killed Tyler's father, has insidious plans of his own.

Hunted by an unknown entity, Tyler races against the clock to retrieve the superpowers, rescue his family and help the others who are depending on him. And when all hope seems lost, help comes in a power he didn’t know he possessed—a mysterious weapon known as The Mystical Blade.
For More Information

Metatron: The Mystical Blade is available at Amazon.
Discuss this book at PUYB Virtual Book Club at Goodreads.
Watch the book trailer at YouTube.

Review
3.5/5
Tyler is a 13 year old superhero. Well not a full superhero......yet. He is still in training and has not received his full powers yet. Then he receives a cryptic text that warns him and threatens his family. Now he has to find out where the rest of his powers are located and get to them in time.
Tyler is 13, extremely smart, football player, great son, boyfriend and superhero. Now has to fight a crazy scientist who he thought he already dealt with.
The story is very well written. It has great action and his girlfriend is a refreshingly down to earth girl. For young teen boys I can see them being interested. It has a great lesson. It was nice to see a guy who had it all not be a bully. I wish I would have read the first book. Even though I hadn't read the first one I was still able to follow along pretty well. Everything was explained beautifully. 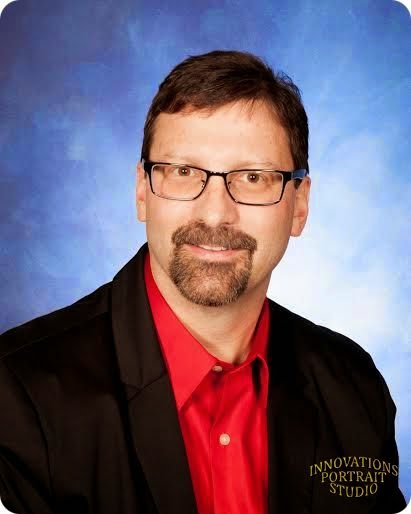 Laurence A. St. John was born on January 11, 1965 in Toledo Ohio. Laurence has one older brother and two younger sisters. Laurence along with his parents, brother and sisters moved once while growing up to Genoa Ohio, just south of Toledo. While attending Genoa Area schools, he was active in track, football and baseball. Later, after he graduated from Genoa High School (Comets) in 1983, he worked for a few manufacturing companies.

At the age of 23 and after three years of dedication, hard work and sweat, in 1988, Laurence received his first-degree black belt (Shodan) in Tae Kwon Do. This gave him the self-confidence and perseverance needed to surmount anything that came his way.

When Laurence was 25 years old he fell in love then married the love of his life, Julie in 1990. He then adopted her two young wonderful children Joe and Jan shortly after.

Out of high school for nearly fifteen years and after persuaded by his former manager, Laurence attended Owens State Community College where he obtained an Associates Degree in Microcomputer Business Systems while working full-time. In addition to computer classes, he enjoyed composition classes where he could free his mind and write what he wanted.

While working in the steel processing business for almost fifteen years, Laurence's place of employment changed hands, for the third time in 2006; fighting for his job, again. In the same year his first granddaughter, Kendall, "Papa's Angel" was born. He described this as one of the most uplifting moments of his life. In addition, it was during this time when his emotions were running wild; he became inspired as well as determined to write his penned-up thoughts on paper.

Nearly four years later, he had completed his first middle grade fantasy novel, Metatron: The Angel Has Risen. His latest book is Metatron: The Mystic/l Blade.

Laurence currently lives in Northwood Ohio with his wife of 24 years, Julie. His son Joe is married to Cari and they have three daughters, Kendall, Sadie and Harper. His daughter Jan is married to Andrew and they have a son Eli and a daughter Evelyn. Laurence currently holds the position of Administrations Manager at Precision Strip, Inc. in Perrysburg Ohio, where he works full time. He continually writes in his spare time; weekends and after work, and is endlessly inspired by his five grandkids Kendall, Elijah, Sadie, Evelyn and Harper.