Swords Around the Throne Book tour. With my Review. 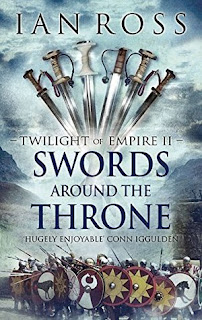 Title: Swords Around the Throne (Twilight of Empire Book 2)
Author: Ian Ross
Publisher: Head of Zeus
Blurb: Rome is in peril. The old order is changing - and Centurion Aurelius Castus has been summoned back from Britain, to find himself caught up in a treasonous conspiracy threatening to bring down the Emperor Constantine.

Rewarding for saving the Emperor's life in battle, Castus is promoted to the Corps of Protectores, the elite imperial bodyguard. The swords around the throne.

But he soon discovers the court to be as dangerous as the battlefield; behind the gilded façade of empire, there are spiralling plots, betrayals and seductions. A nest of traitors. And one relentless enemy.

My Review
4/5
This is an awesome military book. It takes place back in roman times. When Aurelius arrives back in Britain, he is in middle of a conspiracy that he wants no part of. When he is promoted to be on of the ones guarding the throne, he wishes he was back on the battlefield.
I loved all the plots and conspiracies that were going on. It kept you guessing what was going on the whole time. It kept me on the edge o my seat. I wish I would have read the first book, but I still enjoyed this one.
Links:

Ian Ross has been researching and writing about the later Roman world and its army for over a decade. He spent a year in Italy, teaching English, but now lives in Bath.

5x Copies of Swords Around the Throne by Ian Ross INTERNATION