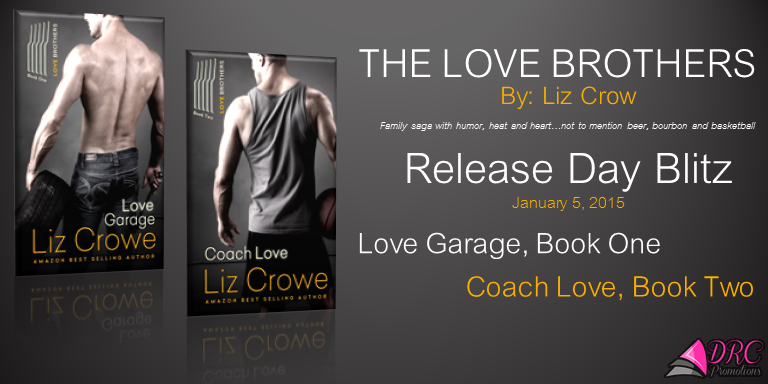 Antony Love is the quintessential responsible oldest brother of a boisterous, Italian/Irish family, placed in charge at a young age by his parents who are busy running the family business. He manages his siblings with a fair but iron hand, until his life is shattered by personal tragedy leaving him the shell of the man he once was.

When outspoken matriarch Lindsay Halloran Love becomes ill, the youngest brother Aiden shows up at Antony's garage, having dropped out of school (again), needing work and a place to crash. Antony provides both, with three caveats: "Don't smoke in my truck, don't be late for work, and don't mess with my girlfriend."

But Aiden Love, budding novelist, gets one glimpse of Rosalee Norris, young widow of Antony's lifelong best friend and all bets are off.

Set in horse country near Lexington, Kentucky, The Love Brothers Series is a saga of family devotion that runs as wide and deep as the Ohio River--except on Sundays when brothers Antony, Kieran, Dominic and Aiden work out their frustrations on the basketball court, Love brother style.

The smoldering intensity of first love ~ the forbidden fantasy of temptation ~ the cold hard facts of real life.
When one man’s hopes are dashed apart in a split second after years spent chasing a dream, he returns home to Kentucky furious at the world and everyone around him.
Kieran Francesco is the middle son of the volatile, tight-knit Halloran-Love family. His role as peacemaker and the one true athlete is well established. He now faces life devoid of the sport he adores after a horrific, career-ending accident, which places him in a new and entirely uncomfortable position—that of the brother with no future.
Over the course of a few tumultuous months Kieran is plunged back into life at the center of the Love family, where he must cope with one self-destructive brother, one ill-timed reconnection to an old flame and a series of bad choices that land him in more trouble than he’d ever known existed.
COACH LOVE, book 2 of The Love Brothers, a family saga of sibling loyalty that runs as deep and wide as the Ohio River—at least until Sunday, when Antony, Kieran, Dominic and Aiden work out their frustrations at the weekly Love brother pick-up basketball game.

Produced by Fiona Jayde Media, starring model Scott Nova, photography by Taria Reed. Narrated by Daniel Dorse, who will record all the books for Audible.com

Amazon best-selling author, beer blogger, brewery marketing expert, mom of three, and soccer fan, Liz Crowe is a Kentucky native and graduate of the University of Louisville currently living in Ann Arbor. She has decades of experience in sales and fund raising, plus an eight-year stint as a three-continent, ex-pat trailing spouse.

Her early forays into the publishing world led to a groundbreaking fiction subgenre, “Romance for Real Life,” which has gained thousands of fans and followers interested less in the “HEA” and more in the “WHA” (“What Happens After?”). More recently she is garnering even more fans across genres with her latest novels, which are more character-driven fiction, while remaining very much “real life.”

With stories set in the not-so-common worlds of breweries, on the soccer pitch, in successful real estate offices and at times in exotic locales like Istanbul, Turkey, her books are unique and told with a fresh voice. The Liz Crowe backlist has something for any reader seeking complex storylines with humor and complete casts of characters that will delight, frustrate and linger in the imagination long after the book is finished.

Don’t ever ask her for anything “like a Budweiser” or risk bodily injury.