We're blitzing the GRAND FINALE for
Parched
By Georgia Clark

Robots, renewable resources, and romance get tangled together in this thrilling
futuristic adventure novel about a utopian city struggling to keep its peace.


Did you miss any of this tour? Go back and check out what you missed...

Launch - More About the Author and Parched
What do you hope readers take with them when they read your book?

Parched is about a girl who joins a rebel underground group to fight for what she believes in. I hope this book inspires readers to do the same.

Hope To Read - Tech Speak: The New Technologies of Parched
One of the most fun parts of writing a sci-fi is getting to invent cool new technologies. Here’s a few of my favorites from my new novel Parched, and where their inspiration came from.

Book N Blog - Review
"Parched by Georgia Clark was an enjoyable and interesting read that gets you thinking about big brother, world domination and what will happen when AI becomes a reality."

Kelly P's Blog - Interview
Who is your favorite character in your book and why?
Ooh, hard question. I love them all!

Coffee Books & Art - Interview
Did you do any kind of research to determine the details of your characters lives / lifestyles?
I did a ridiculous amount of research! I interviewed experts I tracked down online, subscribed science-y magazines, read articles, listened to podcasts. A lot of podcasts, specifically, Robots and Singularity 1 on 1.

Book-Marks the Spot - Review
"This book was intense. There was always something happening and I felt that if I blinked I was going to miss something. . . . Parched was dynamic, mind boggling, and just outright good. It is definitely worth the read."

The Written Adventure - Interview
Where did you get the idea for Tess?
Tess is a combination of me, some of my friends, and other YA heroines. I love creating spunky female characters who are brave, but flawed, who are active, emotional but not just boy-crazy. Tess is not a girly-girl, and neither am I.

Mel's Shelves - Review
"There were some twists, turns and surprising revelations and Tess needed to figure out who she could trust. Once I got involved, I had to keep reading to find out what would happen next. If you enjoy dystopian Sci-Fi, this is a book you will want to check out!"

Welcome to Book City - Review
"I'm quite impressed by this book. . . . I was suddenly spending my last hours awake reading it."

Colorimetry - Three lady memoirs I’m loving
How To Be A Woman, by Caitlin Moran
Warning: Do not start listening to this book unless you’re prepared to have your internal monologue hi-jacked by a Brit. It’s driving me literally balmy! It’s a testament to Caitlin’s distinctive voice as a writer that I’m able to channel her so successfully.

My Life Loves and Passion - Review
"Even though I am not a huge fan of robots, I felt like this was such a good story. Plus how many sci fi/YA/romance stories are out there that are this awesome!"

Typical Distractions - Review
"Parched is exactly what I expected and nothing like I expected. You will enter a world of robots, choices, and the chance to do what is right no matter the cost. It is true to the YA Dysotopian genre but with a spin all it’s own."

Literally Jen - Review
"After I finished reading Parched, all I could think was “wow.” There is so much to take in here, between the richly thought-out world, the customs of each society, and the intricate relationships between all of the characters."

Lilac Reviews - Meet Tessendra "Tess" Rockwood with Dream Cast
Following her mother’s murder, Tess fled her safe and easy life in the domed city of Eden to spend an aimless year in the rough ‘n’ ready Badlands. Here she changed her name, taught herself the local dialect Malspeak, and learned to hunt, protect herself and survive on her own.

Wishful Endings - Meet Hunter Adams with Dream Cast
Tess is first introduced to Hunter when she returns to her home of Eden—a lush, technically advanced and socially conscious city that thrives under a clear dome—after spending a year in the rough ‘n’ ready Badlands. He’s her uncle’s teaching assistant, socially awkward if thoughtful: ‘his curious, darting eyes seem to exude intelligence’.

Deal Sharing Aunt - Review
"I just finished reading Parched and I liked it very much. Anyone who loves to read about a future world with robots and some romance mixed in will like this book. I thought the storyline was good and I liked the action."

Beck Valley Books - Interview
Can you tell me more about the book beyond what it listed on the back cover and what inspired you to write it?
I grew up watching great sci-fi movies like Bladerunner and Star Wars and have always been attracted to the genre: equal parts exciting/fun and thoughtful/insightful. I loved The Hunger Games and felt inspired to write something of that ilk: a young girl in a brave new world, fighting for what she believes in. 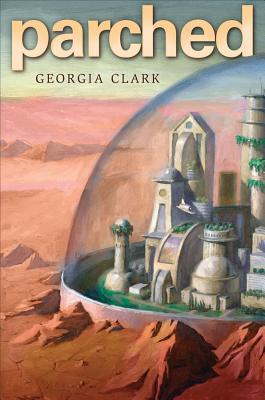 Sixteen-year-old Tess lived in Eden, a seemingly idyllic, domed city where access to information and water is regulated by the governing Trust. After a rogue robot killed her scientist mother, Tess fled with a terrible secret to the desperate, arid Badlands, where she’s recruited by Kudzu, explained to her as a “nonviolent collective working to undermine the Trust and free the Badlands.” Learning Kudzu plans to destroy Aevum, the Trust’s latest advanced robot, Tess reluctantly returns to Eden, where she finds the luxurious life morally unconscionable and secretly trains with Kudzu. Living with her uncle, who’s involved with Aevum, Tess is strangely attracted to his sympathetic assistant, Hunter. During a Kudzu raid on the Trust’s lab, Tess discovers that Aevum will be used to eradicate all inhabitants of the Badlands—and that Hunter’s not what he seems to be.

Georgia Clark is an Australian writer and performer based in Brooklyn. She is the author of the young adult novels SHE’S WITH THE BAND (Allen & Unwin) and sci-fi/romance PARCHED (Holiday House). Widely published online and in print. Won some awards/grants/residencies. Has a play on at the NY Fringe festival. Pretty keen on cheese plates.