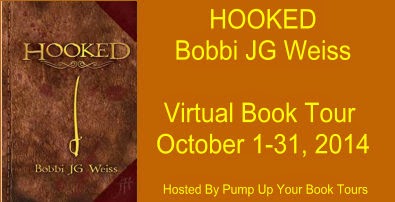 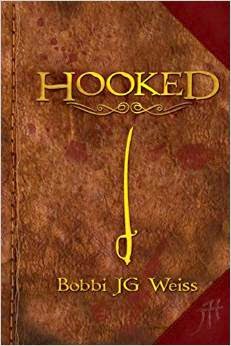 He is not Captain Hook.

His name is Jonathan Stuart, and he’s just an ornery post-alcoholic bookstore owner from Pasadena with a mania for fencing and a bad habit of disappointing his girlfriend. He doesn’t want to be in the Neverland, impossibly trapped aboard the Jolly Roger with a horde of greedy stinking pirates. He was tricked there by Peter Pan.

Pan happily invites children to come to his wondrous magical island, but he has to trick adults. No adult in their right mind would go willingly. Adults, you see, don’t have a very good time in the Neverland. The fairies and mermaids are against them. The island itself is against them. Most of all, Peter Pan is against them.

In particular, Peter Pan is against Jonathan Stuart. Why? Jonathan had better figure that out, and he’d better do it fast before his mutating memories insist that, not only does he indeed belong in this nightmarish hell of bloodthirsty children, ticking crocodiles and vengeful boy gods, but he’s never existed anyplace else.

So you see, he’s definitely not Captain Hook.

Review
4/5
Jonathan Stuart owns a book store and is in a relationship he is messing up. Then he gets his uncle house after he passes and it burns to the ground. He then finds swords and a journal. The journal is about Captain Hook. Jonathan assumes it is a manuscript that was never published. Then he starts to have these horrible nightmares again. Now he doesn't know what is going on. Is he Captain hook or Jonathan. He needs to figure out everything before there is no escape or memory.
This was a spectacular book. I loved peter pan when I was younger and I have never read anything from hooks point of view. It was so mysterious and Kept me wondering what was going on until the end. While I did find the characters annoying at the beginning, they grew on me and I really enjoyed the story.

Stuart didn’t laugh when he saw himself in the mirror this time. At first he wasn’t sure why, because he certainly looked like a lunatic who had just escaped out of a billboard for Captain Morgan rum. And then it hit him. “Everything fits.”

Stuart wasn’t surprised to see his grandfather’s saber laying across those callused palms, tucked into a beautiful silver scabbard. “Of all things,” he said with a mixture of wonder and dread, “this makes the most sense.” His hand gravitated toward the hilt.

Stuart drew his hand back, slowly, with effort. The air grew heavier. “Oh, yes,” he replied as Smee, ever the dutiful valet, settled a red baldric across his charge’s left shoulder, the wide and heavily ornamented belt holding the scabbard at Stuart’s right hip. Stuart fought down panic. His flesh was tingling with a sudden black energy, the same energy he had felt during his ghostly saber battle that night at home. How long ago had that been?

Guided once more by its own objectives, his left hand reached to his right hip and this time succeeded in drawing the saber out. He gripped it, feeling the same marvelous balance between blade and hilt, the same eerie sense of sentience. It had him. He was on its home turf now, and he couldn’t run from it, not here. Something dark closed around him like great black jaws.

“Ah, yeh cut a fine figure, sar. The boys’ll be glad to see yeh.” All smiles and bounce, Smee plucked the saber from his hand and slid it back into its scabbard. He pulled out a rag hanging from his pocket, flapped it over Stuart’s clothes like a butler giving his master a final dusting, then propelled Stuart towards the door. “Come on, sar!”

The doorway was small. Stuart had to stoop to avoid bashing his head. The heels of the jack boots boosted him three inches beyond his own six foot height, and the wig and the hat added another three or four inches easy. He had to remain stooped as Smee led him along a short passageway, and then he went blind as sunlight — not from one sun but two — smacked him full in the face.

His eyes may have been useless, but his nostrils flared at the intense smell of salt and sea. His ears heard vast expanses of heavy canvas flap overhead while waves rippled below. The clamor of many gruff male voices all chattering at once was interrupted as Smee cried out, “All right, ya scurvy scugs! All hands fall in abaft the mizz’n!” Then Smee conducted him up the starboard ladder.

Stuart could do nothing but stumble along, shading his eyes with his hands and blinking, trying to adjust to the brilliance. As he did, he took in more sounds from below — the pounding of bare feet running every whichway, the creak of ropes, the deep grunts and moans of the vast wooden hull. When he could finally see, he found himself standing on the quarterdeck of a three-masted ship, looking down into the faces of forty or so swarthy pirates who stared back up at him, most of their mouths hanging open to reveal an alarming absence of teeth. Eight or nine more men up in the rigging hung like monkeys, gaping down at him.

Stuart gaped back. It had been much easier to deal with Smee. One man. One apparition. One entity to deny as a dream. But try as he might, Stuart couldn’t simply dismiss this motley and very real crowd before him. If nothing else, the overwhelming stench of the men couldn’t be explained away as a dream. A pig farm smelled better than this. He thought he could actually feel the hairs inside his nostrils cower down and try to flatten out rather than conduct such nauseating information to his brain.

“Call all hands from below!” came a bellow from the main deck.

Smee nodded down at the man who had spoken, a handsome Italian pirate with a long black ponytail. “Cecco,” he informed Stuart. “Yer first mate an’ a fine feller.”

Stuart clutched the edge of the rail hard enough to make his fingers cramp. “This is not my crew.”

“This is not my crew! I don’t have a crew!” He glared down at Smee, noticing how the layers of heavy clothing restricted his movements. In order to tilt his head — Smee wasn’t short so much as Stuart was tall, especially in the jack boots — he had to strain against his cravat. He wasn’t used to anything around his neck, and it contributed to the trapped animal feeling he already had. He struggled for control. “This isn’t real. I refuse to believe this is real, and I am most certainly not—”

The exclamation came from a young boy no more than eight years old, dressed in a filthy white shirt and black knickers. Stuart turned toward the voice, squinting to see its owner against the dazzling suns. He saw that the boy had climbed up out of the hatch, his expression a strange mixture of relief and trepidation. Come to think of it, all the pirates wore that expression.

“Hook?” Stuart spat out before he knew what his mouth was doing. “Hook?” He held up his hands. “I’ve got two hands, you stupid little brat! I haven’t got a hook! How can I be Captain Hook if I haven’t got a hook? Anybody in this looney bin got an answer for that one?”

“He’s a bleedin’ ghost!” someone in the crowd muttered.

At that, Cecco turned on a tall, lean pirate whose every inch of visible flesh was covered with tattoos, including his hands and bare feet. Even his face was tattooed, although it was half-hidden by a hat bespangled with coins, jewels and a potpourri of shiny baubles. “What’s that you say about the Captain, Mister Jukes?” Cecco asked sharply.

Feet shuffled. Someone coughed. Jukes tried to duck behind one of his fellows, who roughly pushed him away. “Nothin’,” Jukes squeaked. “I didn’t say nothin’.”

“Aye, nothing,” Cecco repeated with satisfaction. “That man up there is no ghost, ya slackjawed jackanapes!” he boomed, and the men jumped. Stuart jumped, too — Cecco might as well have been using a bullhorn, he was so loud. “That’s the only man the Sea-Cook fears! He’s the only man who ever snared a siren, ate of her flesh and lived! He’s the only man who outsmarted Pan, outsmarted the croc, outsmarted death itself, to come back and beat Pan at his own game! Now act like his crew, by thunder, or you’ll feel the kiss o’ the cat!”

A roar went up the likes of which Stuart hadn’t heard since the last time he went to a Lakers game. They were cheering him! And not one of them, Smee included, seemed to care about his obvious lack of a hook. 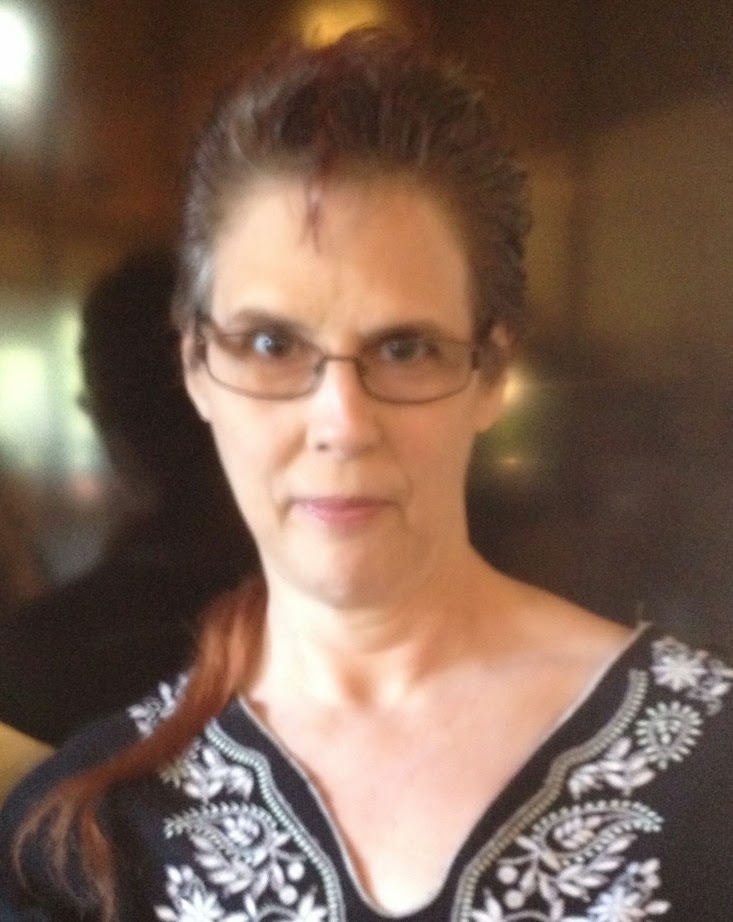 Bobbi JG Weiss made her world debut one Christmas morning (cough-mutter-mutter) years ago, and as long as she can remember, she’s wanted to be a writer. Why? She has no idea. Probably a birth defect.
After several boring “normal” jobs, her writing wishes came true — she and her husband/partner David Cody Weiss began to make their living as full-time freelance writers, focusing on Hollywood tie-in merchandise like movie/TV novel adaptations, comics, and other related and often ridiculous products. After 20+ years of this, the “WeissGuys” decided to enter the wild world of self-publishing.

You can find more information about Bobbi, her books, her life, and her weird husband at bobbijgweiss.com. She also posts on Twitter, tumblr, Pinterest and Facebook unless her passwords mysteriously stop working and she can’t get on, which seems to happen a lot. Why? She has no idea. Probably computer voodoo.