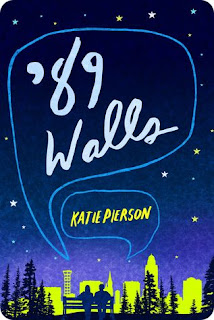 College is not in the cards for Seth. He spends his minimum wage on groceries and fakes happiness to distract his mom from the MS they both know will kill her. It’s agony to carry around a frayed love note for a girl who’s both out of his league and beneath his dignity.

Quinn’s finishing high school on top. But that cynical, liberal guy in her social studies class makes her doubt her old assumptions. Challenging the rules now, though, would a) squander her last summer at home, b) antagonize her conservative dad, and c) make her a hypocrite.

Seth and Quinn’s passionate new romance takes them both by surprise. They keep it a secret: it’s too early to make plans and too late not to care. But it’s 1989. As politics suddenly get personal, they find themselves fighting bare-fisted for their beliefs—and each other—in the clear light of day.
For More Information
’89 Walls is available at Amazon.
Pick up your copy at Barnes & Noble.
Discuss this book at PUYB Virtual Book Club at Goodreads.

Quinn used the three extra minutes before class that day to turn in her cap-and-gown order form at the office. She made sure no one was looking before skipping down the marble staircase like a little kid. She watched her light-green sundress rise and settle with each bounce. The translucent afternoon sun had managed to warm the foyer by the entrance doors as if spring might actually stick. A tiny breeze jiggled the branches of the narrow pine trees framing the building’s entrance. The stretch of blue sky spanning the transom window reassured her, like it was telling her that years of self-conscious high school angst were almost over.

Only Trish understood how crucial Quinn’s façade of success was to the fact of it. As long as she stuck to the script—Take the advanced placement classes. Study. Join the debate team. Perform.—she could hold herself together. She could no more drop the script than let her bones dissolve.

She stomped on the final step. As she rounded the bottom of the stairwell, she saw Seth walking to class from the opposite direction. His dark-blond hair looked like it wanted to cover his eyes but was failing at it. Even looking at him made her feel defensive.

He drew near enough for Quinn to read his T-shirt. A cartoon of Uncle Sam silk-screened in black-and-white on the front said, “Join the army. Travel to exotic, distant lands. Meet exciting, unusual people. And kill them.” On the inside, Quinn rolled her eyes; why did liberals like him act as though people like her invented war and they alone wanted peace, love, and teddy bears? Quinn read his shirt again. Okay, maybe it was kind of funny. But it looked out of place on a guy who never smiled.

They had less than a minute before the bell rang, and the hallway had emptied out. He probably wouldn’t acknowledge her; he never even said hi unless she said hi first. But he passed the classroom door. He was headed straight for her. His tan cheeks glowed bright pink, and his eyebrows scrunched together. Quinn felt her shoulders creep up as their eyes met. Was he going to call her out on something right now?

She saw Ilene slipping into the classroom and waved at her. Quinn tried to veer out of Seth’s path; if he wanted to tangle, he’d have to wait until class, when Mr. Levine could referee. But he sidestepped in front of her, forcing her to stop. What the hell? They stared at each other for several seconds. Quinn noticed that the dark brown of Seth’s eyes blended right into his pupils. He also had broad shoulders for a lean guy, but he was barely three inches taller than she was.

Seth started to say something but then kind of deflated. He pressed a limp, folded piece of notebook paper into her hand. Scowling at the floor, he mumbled something under his breath before charging into the classroom.

Quinn looked around in confusion to see if there had been witnesses. There hadn’t. She walked into room 105. She sat down next to Ilene and said hi back to a few people. Taking a huge, slow breath, she slid the letter into her folder and pulled a pen out of her backpack.

Waiting for the slackers to trickle in, Mr. Levine strolled over to his desk and pried the lid off yesterday’s McDonald’s drink. He poured the light-brown liquid into the spider plant. Then he flipped off the lights and closed the door. He rubbed his hands together with that sinister glee that teachers saved up for things like pop quizzes. Then he slapped an outline on the overhead projector, on which he’d chicken-scratched the title “South Africa.” As the class groaned, Mr. Levine shrugged out of his sports jacket. He tossed it across his desk with one of the sleeves inside out.

As soon as he starting talking about apartheid, Quinn flipped open her folder to read the note.

Here’s what I’ve wanted to say to you for a long time: I’ve liked you since the beginning of tenth grade. We haven’t had any big conversations, but I feel like I know you.

I know that you’re genuinely nice. Even though you have a lot of friends, you make a point of saying hello to people like me (the shy, antisocial types!). You’re really pretty, especially when you wear that green dress. You’re also smart. I hear George Washington University figured that out, too. Congratulations on getting in.

I wondered if you’d like to go to a movie sometime. I know it sounds weird coming from someone you’ve barely talked to (and especially from someone who would tease you about being a Republican), but I hope you’ll say yes. 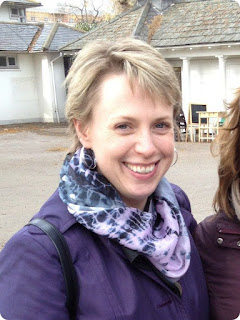 Katie Pierson freelances for local non-profits, using her background in public policy and grassroots organizing to overthrow the patriarchy one introverted step at a time. When she’s not writing fiction, she returns library books, makes soup, and tries to be cooler than she really is by hip-hopping at the YMCA. She earned a Bachelor’s Degree in American History from the University of Pennsylvania (where she dabbled briefly in being a College Republican) and a Master’s in American History from the University of Minnesota. She grew up in Lincoln, Nebraska, and now lives with her family in a suburb of Minneapolis. ’89 Walls is her first novel.