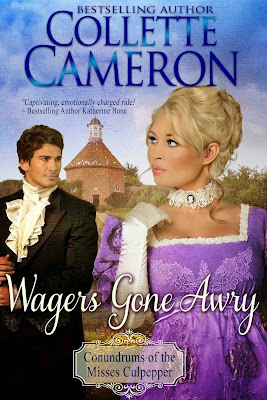 Brooke Culpepper resigned herself to spinsterhood when she turned down the only marriage proposal she’d likely ever receive to care for her family. After her father dies, a distant cousin inherits the estate and becomes their guardian but permits Brooke to act in his stead.

Heath, Earl of Ravensdale is none-too-pleased to discover five young women call the dairy farm he won and intends to sell, their home. Desperate, pauper poor, and with nowhere to go, Brooke proposes a wager. His stakes? The farm. Hers? Her virtue. The land holds no interest for Heath, but Brooke does and he accepts her challenge.

Brooke loses, and her devastation is compounded when the cousin arrives, intending to haul the Culpepper misses off to London. Heath astounds himself and proposes in order to apply for guardianship of the other girls. Does Brooke dare marry the handsome stranger who’d been bent on compromising her? Will Heath regret his impulsive gesture, or will unexpected love flourish? 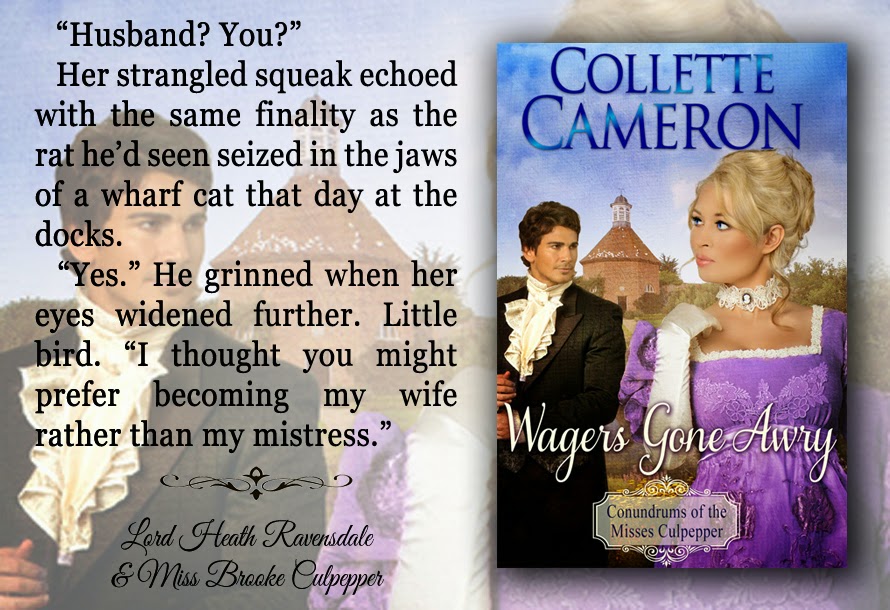 “Is someone at the door, Duffen? In this weather?”

The door swung open and revealed a striking blonde, wearing a dress as ugly and drab as the dismal day.

Despite the atrocious grayish gown, the woman’s figure stole the air from him. Full breasts strained against the too small dress, tapering to a waist his hands could span. And from her height, he’d lay odds she possessed long, graceful legs. Legs that could wrap around his waist and…

Though cold to his marrow, his manhood surged with sensual awareness. He shifted his stance, grateful his long overcoat covered him to his ankles. He snapped his mouth shut. Evict this shapely beauty? Surely a monumental mistake had been made. Gainsborough couldn't be so cold-hearted would he?

The woman regarded him much like a curious kitten; interest piqued, yet unsure of what to make of him. Her dark blue, almost violet, eyes glowed with humor, and a smile hovered on her plump lips. The wind teased the flaxen curls framing her oval face.

A dog poked its snout from beneath her skirt and issued a muffled warning.

She neatly stepped over the portly corgi. The bodice of her gown pulled taught exposing hardened nipples.

Another surge of desire jolted Heath.

Rainwater dribbled from the hair plastered to his forehead into his eyes. He swiped the strands away to see her better.

The dog skulked into the house. Just barely. He plopped onto the entrance, his worried brown-eyed gaze fixed on Heath.

Ebénè nudged him, none too gently.

He glared at the grinning buffoon peeking around the doorframe. The woman probably thought Heath a half-witted dolt.

A ruckus echoed behind her. She glanced behind her as four more young women crowded into the entry.

Blister and damn. A bloody throng of goddesses.

Surely God’s favor had touched them, for London couldn't claim a single damsel this exquisite, let alone five diamonds of the first water.

Gainsborough had some lengthy explaining to do. 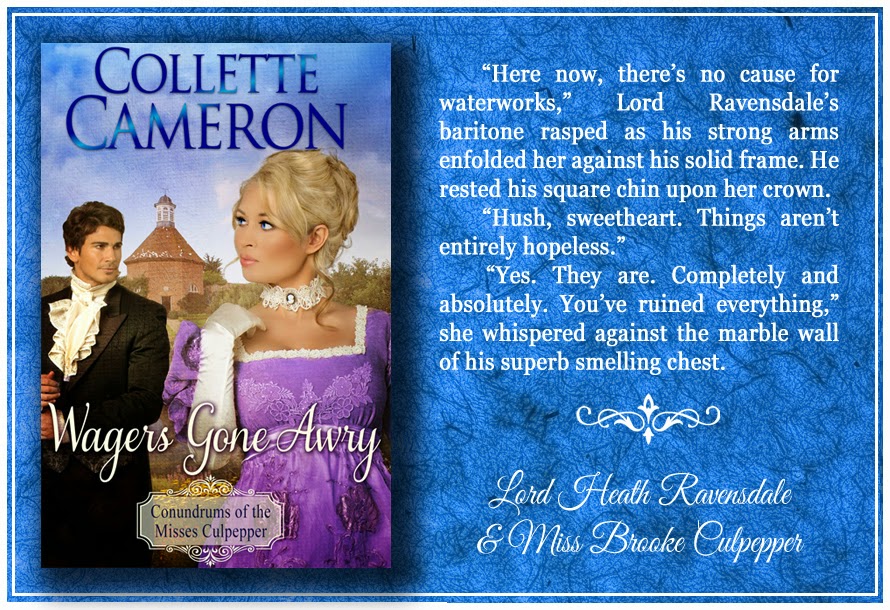 “My lord, this way if you please.” Miss Culpepper motioned to the doorway the girl dressed in green disappeared into earlier. “We’ll give you a moment of privacy to dry yourself and exchange your coat for Papa’s. It’s rather worn, I’m afraid, but you should be a mite more comfortable than wearing yours.”

The trio filed through the entrance, slender as reeds, each of them. A natural physical tendency or brought on by insufficient food? Mayhap both.

Heath followed, guilt’s sharp little teeth nipping at his heels. He glimpsed the tray as Miss Brette arranged it on a table before the fireplace. How they could be charitable he didn’t know, and had their situations been reversed, honesty compelled him to admit, he mightn’t have been as hospitable. Not much better than their snake of a cousin, was he? The notion left a sickening knot in his middle and a rancorous taste on his tongue.

Actually, the foul taste might be a spot of mud he’d licked from his lip. Pray God the dried crumb was mud and not some other manner of filth.

“Let’s give his lordship a moment, shall we?” With a wan smile, Miss Culpepper ushered her wards from the study.

Frenetic whispers sounded the moment they left his sight.

Heath made quick work of exchanging the jackets. The one he donned smelled slightly musty and a hint of tobacco lingered within the coarsely woven threads. Too big around, the garment skimmed his waist. The Culpeppers didn’t get their height or svelteness from Mr. Culpepper’s branch of the family. Heath tugged at a too-short sleeve, and his third finger sank into a moth hole.

What brought this family to such destitution? 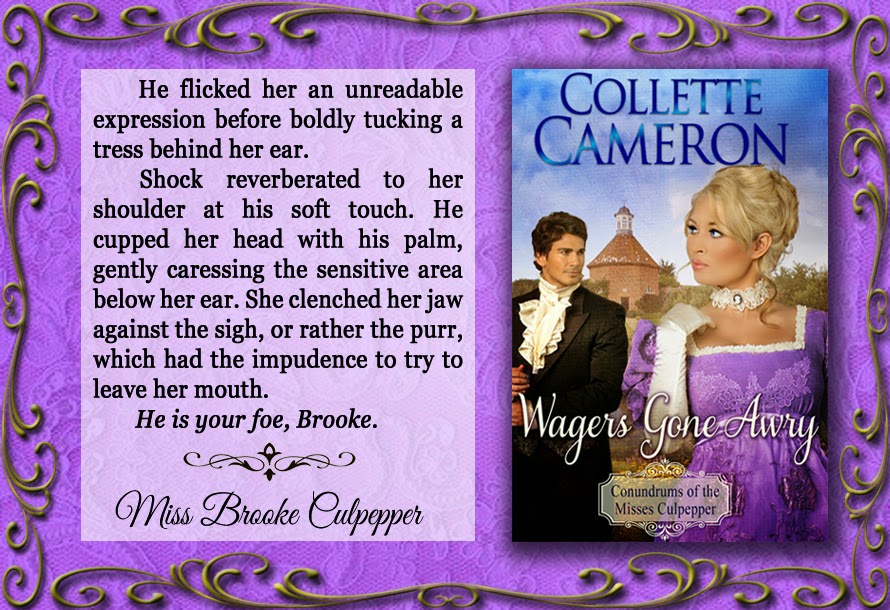 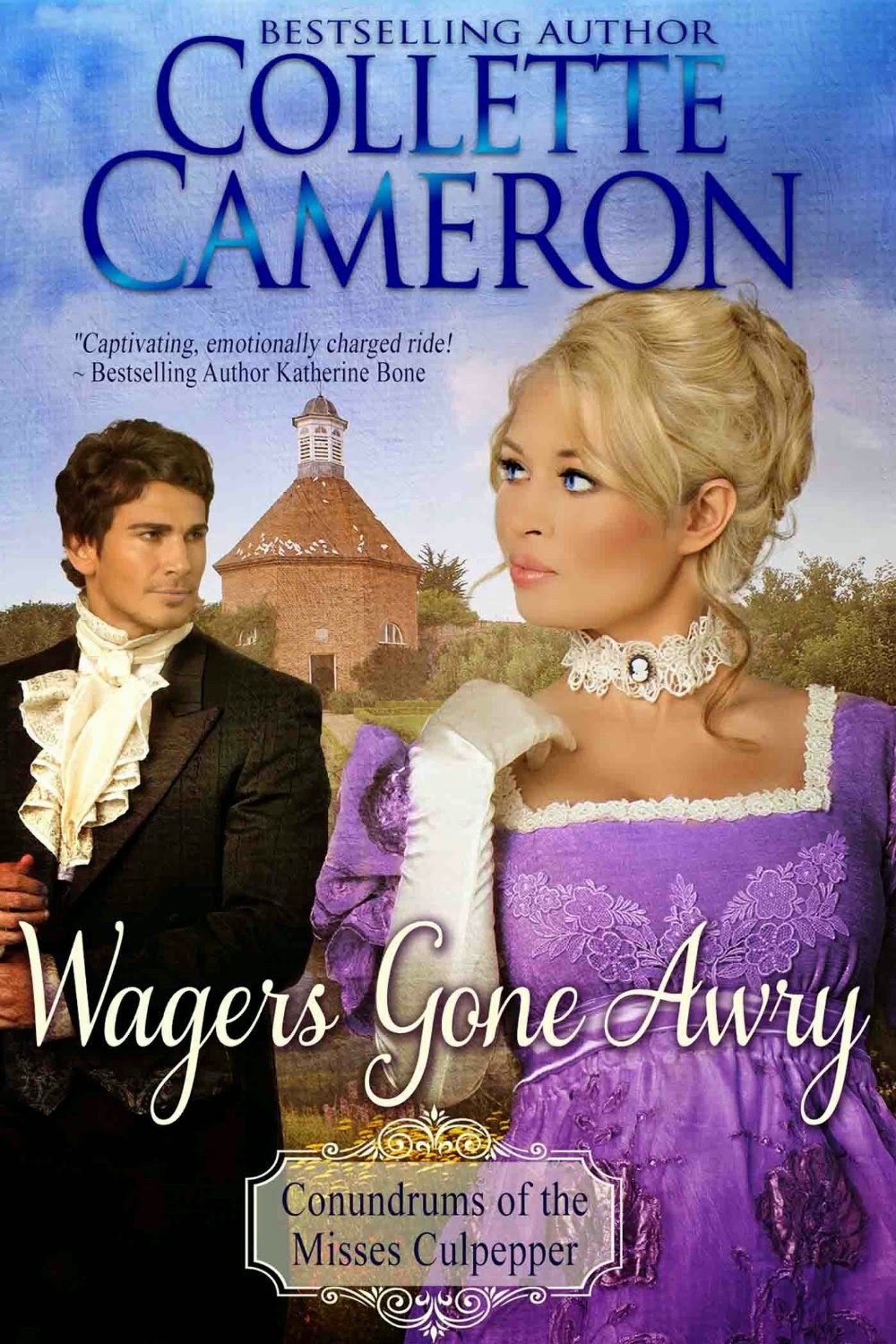 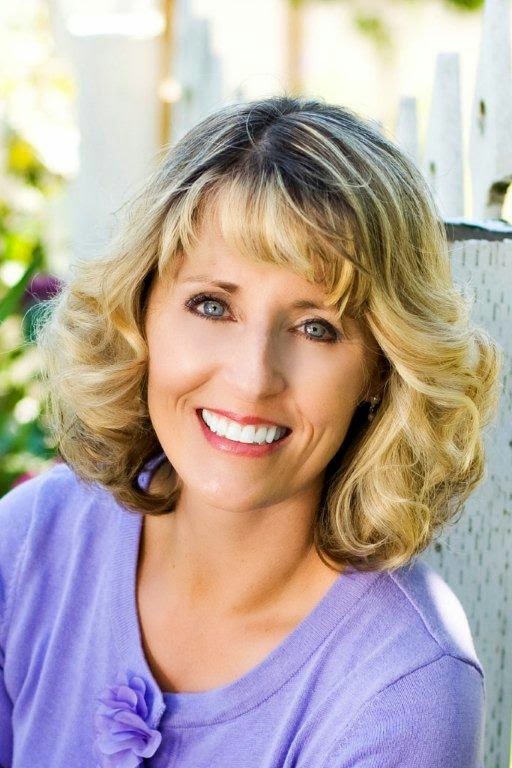 Bestselling, award-winning author, Collette Cameron, has a BS in Liberal Studies and a Master's in Teaching. Author of the Castle Brides Series. Highland Heather Romancing a Scot Series, and Conundrums of the Misses Culpepper Series, Collette writes Regency and Scottish historicals and makes her home in the Pacific Northwest with her husband and five mini-dachshunds. Mother to three and a self-proclaimed Cadbury Chocolate chocoholic, Collette loves a good joke, inspirational quotes, flowers, trivia, and all things shabby chic and cobalt blue. You'll always find dogs, birds, quirky—sometimes naughty—humor, and a dash of inspiration in her novels.

Her motto for life? You can’t have too much chocolate, too many hugs, or too many flowers or books.


Join Collette's Street Team
Collette's Chéris is the official street team for Collette Cameron. Be the first to hear good news, take a peek at works in progress, and have the opportunity to sign up to review Collette’s book. She offers random giveaways to street team members who regularly support her and promote her books. 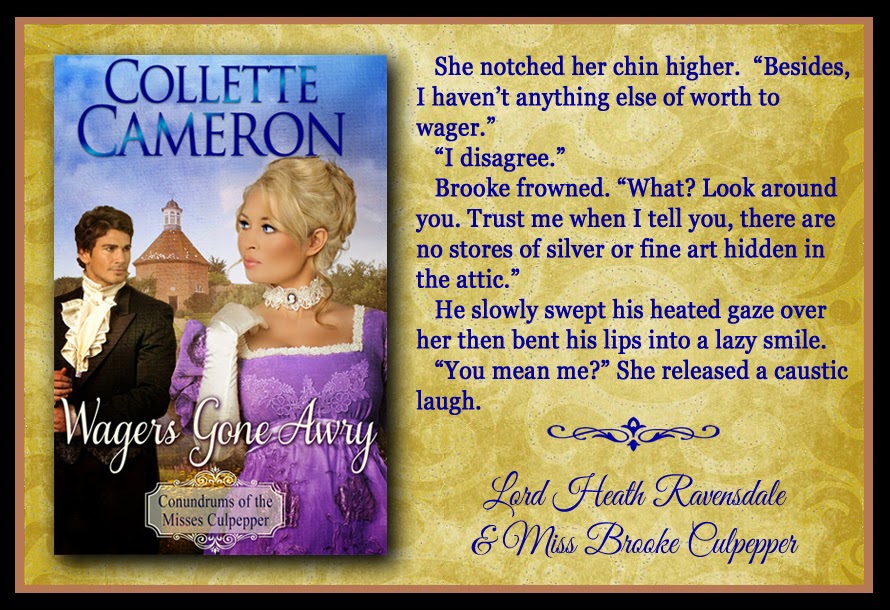