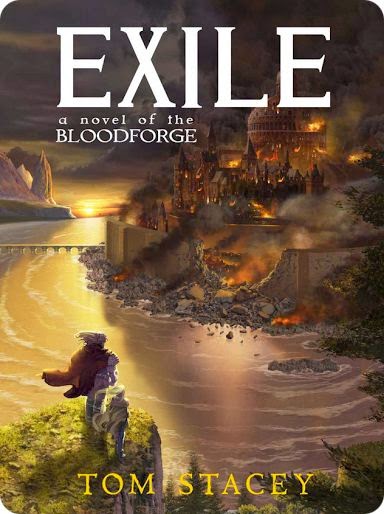 On the fringes of the Verian Empire, two small boys stumble upon a strange altar, buried in the heart of a mountain. There they awaken a horror unseen for generations, that will descend upon the realm of men while it is at its weakest. For Veria is a nation at war with itself, only recently recovered from a bloody rebellion, and the time of heroes has passed. The empire is in a state of chaos, and while its ruler, the Empron Illis, rids the land of his remaining enemies, unseen forces are gathering at the borders. However all eyes are turned inwards. The Empron is not a well man, and there are whispers among the common folk that his advisors are spies; demons that only wear the flesh of men.

Yet there is hope...

In the distant mountains, a forester who has buried his past learns that he has not been forgotten, and that his crimes have sought him out at last. But he is no simple woodsman. He is Beccorban the Helhammer, Scourge, Burner and the Death of Nations, and his fury is a terrible thing.

For when all the heroes are gone, Veria will turn to those it has forgotten, before all is lost.

For More Information
Exile is available at Amazon.
Pick up your copy at Barnes & Noble.
Discuss this book at PUYB Virtual Book Club at Goodreads.

Review
4/5
This story begins with 2 brothers exploring. The come across a temple. Against their better judgment they go into the temple. They awaken an evil that has been dorment. Both brothers do not make it back. Now this evil is awake, what will they do.
the story starts off way to slow. I thought the prologue was good to explain things, but there was to much. I found myself wanting to skip it and read the story. I loved the story but it could have been a shorter story. It reminded me of a Robert Jordan type story which I enjoyed. I can't wait to read more. About the Author
Tom Stacey is an English author of the fantasy novel, Exile. Tom was born in Essex, England, and has lived there his whole life. He began writing at school, often taking responsibility for penning the class plays, or writing sketches with his friends. While attending university to read history, Tom developed his writing by creating several short stories, some of which would later become to basis for his debut novel, Exile.

Tom self-published Exile in summer 2014 and is currently working on the sequel as well as another unrelated novel. He earns a living as a video producer in London in the day and writes at night, a bit like a really underwhelming superhero.