The Unholy review. Plus an interview. 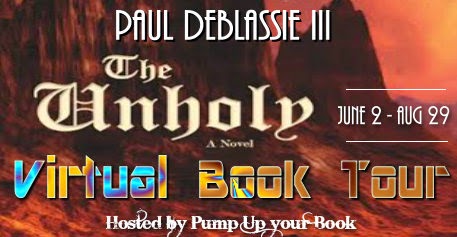 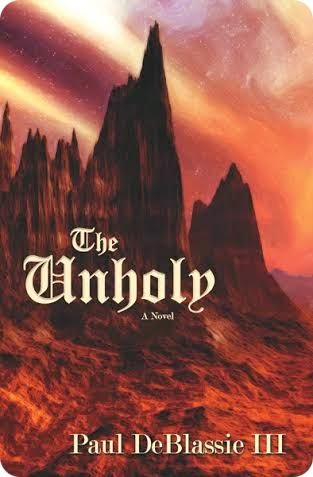 A young curandera, a medicine woman, intent on uncovering the secrets of her past is forced into a life-and-death battle against an evil Archbishop. Set in the mystic land of Aztlan, The Unholy is a novel of destiny as healer and slayer. Native lore of dreams and visions, shape changing, and natural magic work to spin a neo-gothic web in which sadness and mystery lure the unsuspecting into a twilight realm of discovery and decision.
Purchase your copy at AMAZON
Discuss this book in our PUYB Virtual Book Club at Goodreads by clicking HERE

Review
3.5/5
A child witness her mothers death and then is hidden by a medicine women so that she is not killed also. Then it jumps to the present where a young women just got her job at a mental hospital. It specializes in treating native Americans and Mexicans in natural ways. She then finds herself in a life and death battle against an arch bishop. Fighting against religion abuse.
It's a very good story. I like how it was told in a say that talks about real issues in a fantasy world. Defiantly something to read.

“Hush now, child,” said a voice she recognized as that of her mother’s

closest friend. “The man cannot harm you, mijita, as long as you are with us.

We will make him think you are dead. But you must be very quiet. Ya no

llores,” the woman warned, raising a finger to her lips.

of a single candle. The cave was frightening, with shadows of what appeared

to be goblins and demons dancing on the red sandstone walls. “I will return for

you soon. You will be safe here,” the woman said. The girl watched the woman

walk away, shivering as a breeze blew through the cave’s narrow passages.

Closing her eyes, she rocked back and forth—imagining herself safe in

through the mouth of the cave. The shadows on the walls were just shadows

now, no longer goblins and demons. As she slipped into a trance, images

flickered in her mind. She saw the woman who had brought her to this place

struggled, helped by two other women the girl could not identify.

Suddenly, the scene shifted to a stone ledge jutting over the mesa, and

she heard the pounding footsteps of a man running toward the women. The girl

felt her heart race and her breathing quicken, afraid that the bad man would

spot them and kill them. Then the image shifted again, and she now saw on the

the granite ledge. As he left, she heard his thought: The child is dead.

Can you give us a little background behind The Unholy?

The story comes out of over thirty years of treating patients in psychotherapy who are survivors of the dark side of religion…have been used and abused and cast to the side. I’ve seen that when this happens people, those around the victim, to include family and friends, often turn a blind eye and deny what has happened. Rather than writing a self help book I decided to approach this realm of human suffering in fiction. To tell a story moves the reader into a deep and unconscious dimension that bypasses conscious defenses, leaving us open to truths that otherwise would be blocked. So, dramatizing the dark side of religion, pulling what can be the most vile and evil, and pivoting it against an innocent and sincerely searching soul leaves the reader on edge, hopeful, but unsure as to what will happen and who in the end will survive…a truth conveyed symbolically and dramatically. To have written out a list of what to do or not to do in the midst of religious abuse might have helped some individuals, but would have left many people stone cold because there is no emotion is such guidance. In The Unholy, the story is pure emotion, fear and rage and hope and challenge, that inspires and frightens and causes us to stay up late at night in order to finish the story. Dream and chronic nightmares plagues people who’ve gone through the horror of being abused within a religious system. It could be emotional, spiritual, physical, or sexual torment---or all of the above---a true encounter with the unholy---that people undergo during childhood or adolescence or adulthood. They become anxious, depressed, or suffer a terrible emotional breakdown. I’ve treated them, helped them, and they helped to inspire the story of The Unholy!

How to you develop your characters?
The stronger the character in terms of capacity for both love and rage the more compelling they are and it is in this that the true character is birthed. Love and rage are in essence the nests in which the characters are cared for and nourished and then allowed to fly free. I find that I must dip into my own capacity for primal feelings of love and rage in order to discover that aspect of myself that is like the character, has been like or felt like the character feels in the situation. It’s critical to always allow this to move the story forward and not get stuck by over thinking the character, to just hit and go into the emotional life of the character and let the character then tell me what he or she wants to express. The rage in particular can be horrifying because of our human capacity to inflict injury on others or society. To then express this on the page leaves me feeling vulnerable yet also true to myself within this dimension of storytelling. It’s mind boggling for me to experience the rage of the character and what the character like Archbishop William Anarch in The Unholy wants to do and does to innocent human beings. Claire Sanchez, the medicine woman, on the other hand needs to find rage, a healthy aggression, that has gone awry in Anarch, and only by doing this, if she can, will she potentially be able to discover the strength to fight the powerful archbishop.

Aspiring authors sometimes feel like they want to give up. What kind of advice do you have for them?

If you’re feeling the impulse to write, it’s because you have writing in you so do not stop no matter what inner or outer critics have to say because it’s not about going down a dead end road and then giving up so much as taking turns in the road as they present themselves. Write and never stop. I read a famous horror writer state that each writer needs to know when they should just give up. Completely, totally, and utterly I disagree. There is no giving up for the authentic writer, one inspired, called by the gods. Writing is matter of sanity and life. To not write for a writer is no more possible than to not breathe. Writers everywhere keep on writing. Never has there been more opportunity to write and be published. Even being published is secondary. Write and never stop because at some point and in some way you’re going to hit a stride that will catch a publishers eye and they’ll want to take you on. So, as far as advice for writers, stay with it, never ever give up, catch your stride and without question you will one day meet up with your publisher and audience. Lastly, when despair comes over you as a writer, take it as a good thing since usually behind all things shadowy there is a truck load of potential. That potential eventually reaches consciousness providing that despair is understood as a fallow time and nothing more or less than that. It’s not a dead end. It’s a turn in the road or redirection of sorts that sends the writer deeper so she or he can listen with greater sensitivity and ultimately discover fresh inspiration.

Do you have any writing tips?

Go with the flow and don’t overthink since it’s the over thinking that blocks the creative streams from running their course. Whenever I want to set things up in a rigid way and have definite structure and discipline and hard core ideas about how I should write, when I should write, and what a given story is about, then the trickster in my own psyche emerges and turns everything upside down and inside out. The creative process only respects sensitivity so as to listen and to follow the flow of what is felt, no dictation in terms of the ego telling the deep resources of the mind what to do, no cookbooks or formulas allowed. You can have technically correct but soulless writing. It’s not real stuff, its contrived verbiage, a cut out story with no mojo. When the only writing tip that we follow and that I follow is to hit the page running and catch a good stride, staying with the energy of the scene or character then al is indeed well and authentic in the world of the professional writer. Of course, reading a great deal figures into this since we absorb, by psychological osmosis, the experience and style and juju of those that we read. Each generation of writers builds on the one before it. We get tips, whether we realize it or not, from those that we are reading, their voice coming through into the head of the writer and effecting the very next word they write.

PAUL DeBLASSIE III, PhD, is a psychologist and writer living in his native New Mexico. A member of the Depth Psychology Alliance, the Transpersonal Psychology Association, and the International Association for Relational Psychoanalysis and Psychotherapy, he has for over thirty years treated survivors of the dark side of religio

His latest book is the psychological/paranormal thriller, The Unholy.