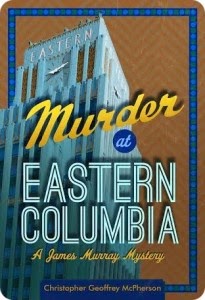 Los Angeles. 1931. Your name is James Murray. You are a clerk in the Junior Boy's department at the swankest new department store in downtown. You want to be a writer, but there's a Depression on. Suddenly, you find yourself trying to solve the murder of your best friend. Will you be able to find the murderer before it's too late?

"Murder at Eastern Columbia" is two novels in one: two parallel stories, featuring two heroes, working two murders in two different versions of 1930s Los Angeles. Join James and his alter ego as they each try to solve the murder of the girl with sorrel-colored hair. Follow the twists and turns until the climactic scene atop the tallest building in all of LA: the brand new Los Angeles City Hall.

For More Information
Murder at Eastern Columbia is available at Amazon.
Pick up your copy at Barnes & Noble.
Download at iTunes.


Review
4/5
So this is a story inside of a story. There is James who is an author writing a murder mystery book and works at a department store. Soon his friend/coworker is found dead at the store. They don't want to involve the police so they ask James to figure out what happened.
In his story a very similar situation goes down.
The story takes place in 1930s during the depression and prohibition. It is very interesting. I forgot how people talked then so it was an adjustment. I did though love that two stories were going on at the same time. I liked that you could tell the difference and weren't spending the whole time wondering. I love mysteries and once you get past the strangeness of the lingo, its an awesome book!

In more than three decades as a professional writer/journalist, Christopher Geoffrey McPherson has covered myriad subjects and interviewed thousands of people from the famous to the unknown. He brings his years of experience to each one of his novels.

Every work is different. Through reading his novels, you can visit the American home front in the 1940s, a future San Francisco wiped out by a killer earthquake, a romantic love affair in post-war Paris in the 1920s, a future planet where the major industry is making babies -- or an exciting detective series set in 1930s Los Angeles.

In his career, his work has appeared in daily newspapers, monthly magazines, extensively on radio and the occasional dalliance with television. He has written advertising copy and radio commercials -- and continues to write.

Christopher is currently working on a series of novels that take place in 1930s Los Angeles called “The James Murray Mysteries.” Books in the series are "Murder at Eastern Columbia," “Sabotage at RKO Studio” and the newest “Abduction at Griffith Observatory.”

Other works featuring his byline include "The Babi Makers" -- a science fiction tale about a world where the most important resource is babies; "Sarah & Gerald" -- a novel about Paris in the 1920s; "Forever - and other stories" -- a collection of short stories; "The Life Line" -- the novel of the big one that levels San Francisco; "News on the Home Front" -- a novel of two friends during World War Two; and "Mama Cat" -- a book for children. Also, several short plays, a few radio plays and a boatload of radio documentaries.
For More Information
Visit Christopher Geoffrey McPherson’s website.
Connect with Christopher on Facebook and Twitter.
Visit Christopher blog.
More books by Christopher Geoffrey McPherson.
Contact the author.