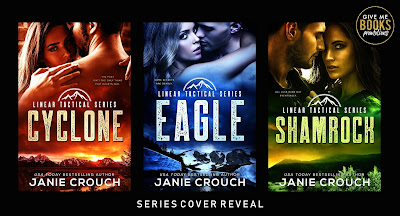 He’d protect her from any threat…
But what if the biggest threat is him?

Doctor Anne Nichols is back in Oak Creek, Wyoming, only because she has no other options. Here, she was always the shy, stuttering girl, invisible to everyone.

Except Zac Mackay. The very reason she left in the first place.

Zac’s years in Special Forces taught him survival skills, and he’s created a company—Linear Tactical—to teach those skills to others, so they never have to live in fear.

Then why is Annie, the last person he’d ever want to hurt, afraid of him?

Zac’s determined to wipe the fear from the eyes of the woman who has never been far from his mind. And fix the mistakes—his mistakes—that put that look there in the first place.

But a predator has set his sights on Annie. And now survival skills will become much more than lessons…

When former Special Forces soldier Finn Bollinger is asked to help with a deadly government mission, he’s up for the task. His job teaching survival skills to civilians at Linear Tactical keeps him sharp, and he can still handle himself in the field.

But the Army damn well didn’t teach Finn how to handle Charlotte Devereux. She’s back and she’s all sorts of bad news.

Charlotte can’t change the past. Can’t change the choices she made or the fact that they cost her everything. All she can do is endure the fallout. Even if that means putting her future in the hands of Finn, the man who has every right to want to destroy her.

And can in so many more ways than he thinks.

When the undercover mission goes impossibly wrong, they’ll all have to depend on Charlotte’s strength in order to survive. But everyone has a breaking point…

Every mission has a price.
He never meant for her to pay it.

Aiden Teague had never left a fallen comrade behind, not during his years in the Special Forces nor afterwards as part of Linear Tactical. But he’s forced to do so in an undercover mission gone wrong, leaving a woman trapped in a human trafficking ring.

Violet Collingwood learned in the most brutal way possible that no one is promised a happy ending. She knows Aiden blames himself, at least in part, for what happened to her at the hands of the traffickers, but she refuses to let her abduction define the rest of her life.

She won’t be a victim again.  And she’s going after what she wants: Aiden.

Watching Violet transform herself into a fierce warrior is the sexiest thing Aiden has ever seen. The honorable plan would be to stay away from her—let her heal and grow without the shadow of his mistakes clouding her progress—even though every instinct tells him to claim her for his own.

But when they discover the danger they thought they’d left behind is closer than ever, they’ll have to confront their fears and fight side-by-side in order to survive.

USA TODAY bestselling author Janie Crouch writes what she loves to read: passionate romantic suspense.  She is a winner and/or finalist of multiple romance literary awards including the Golden Quill Award for Best Romantic Suspense, the National Reader’s Choice Award, and the RITA© Award by the Romance Writers of America.

Janie recently relocated with her husband and their four teenagers to Germany (due to her husband's job as support for the U.S. Military), after living in Virginia for nearly 20 years. When she's not listening to the voices in her head—and even when she is—she enjoys engaging in all sorts of crazy adventures (200-mile relay races; Ironman Triathlons, treks to Mt. Everest Base Camp) traveling, and movies of all kinds.