Book 1 Haunted by memories of her brother's death, and searching for answers,Lily Hart embarks on a career that takes her into a seedy underworld, where she is exposed to wealth, greed, lust and the reign of gorgeous, powerful, and dangerous men--one man in particular wreaks havoc on her emotions.
At thirty Jake Eden has everything: looks to die for, money, power and a never-ending line of twisted, fucked-up women willing to do anything to get with him. Love? Love was for pussies...until a woman with the stage name of 'Jewel' arrives on the scene. She alone is different from all the others.
Oozing pure, unadulterated sex, strong, intelligent and independent, she is everything he should stay away from, but she makes him itch to tame her and keep her for himself.
Her lure is addictive and undeniable and soon he is hooked.
But when the line between betrayal and loyalty is put to test...
Will love be stronger than revenge?
Book 2 Lily: It wasn't supposed to be like this- I came ready, determined, but nothing could have prepared me for Jake Eden.
Engulfed in his power, his lust and his primal need for me, I've become ever more helpless in his hands. I love the way he touches me, holds me, protects me. I feel alive in ways I cannot explain. I know I am giving my body to a criminal...week after week, but I can't stop.
I'm addicted.
He has no idea.
It's all wrong, but I'll stay with my plan until I figure out a way around the conflict I'm facing...
Jake: I never knew that looks could blindside a man the way Lily Hart's beauty did me. When our eyes collided that first time, the connection was instant, I knew, that she was like no other. She was something special, uniquely different.
But I've discovered since then that there is a secretive side to her, and now I fear deception stalks her eyes.
I know I must keep my distance, but she keeps persisting that I have her heart, so how can I push her away when all I want to do is tie her down and make her mine?
Book 3 Lily: I've been such a fool. Such a fool. He saw me coming and tied me up in knots. And I let him. After Vegas, my heart and mind have been thrown into complete disarray. Is it really possible that what we had-- all that blazing, unquenchable passion--was just an illusion?
I know I've lost his trust, but somehow I must find a way to repair the damage I have caused and find my way back to his heart.
I have to make it right... whatever it takes.
Jake: She is my wife now, but I know she's not mine. Not really. Not properly. Not the way I want. You see, I want it all. Every last bit of her: heart, mind, body and soul.
And I'm prepared to move heaven and earth to make that happen.
This is my mission and my promise.
Watch me make her mine or die trying...

‘Nooooooo,’ I howl, but there is gravel or grave soil in my throat, and nothing other than an ugly, dried-up rasp travels out of my mouth. My head shakes back and forth like a mindless wind-up toy. Even my body is denying the horror before my eyes. Without warning my knees buckle under me, and I find myself in a heap at the doorway of his flat. Frantically, I begin to crawl toward him, screaming, babbling.
I can’t lose him! Not him! Oh God, not him. Please. Not him.
Two feet away from his body and it occurs to me: this is just a nightmare. Of course it is. It has to be. Any moment now I’ll wake up. And the first thing I’ll do? Call him and tell him how much I have missed him, how much I love him.
I feel the floor scrape against my bare knees. It isn’t a nightmare. It is real.
We haven’t spoken for two weeks. I had exams and when I called his mobile, it went straight to voicemail… Shit excuse. I should have called again, I should have emailed. Why hadn’t I? I should have known.
I hunker down over his body, my pose ungainly, heavy, that of a suffering beast. My buttocks hit the floor and my legs fold up and cross under me. I press my fingers against my open mouth and stare at him. His lips and fingers are blue and the rest of him is ashen and still. He can’t be dead.
It can’t be real!
The stillness of a dead body is impossible to describe. And yet when you see it you refuse to believe it. You always think it is a trick. A mistake. A ploy… But a needle is embedded in his arm, which is blackened with the skin stretched and unreal. It looks as if it belongs elsewhere. That is not my brother’s arm. I know my brother’s arm as intimately as I know my own.
My breathing is shallow and trembling. I suck a huge burst of air into my lungs and pull the offending needle out. My stomach twists. It should never have entered his body in the first place. I throw the syringe away. It hits something and rolls on the wooden floor. It also leaves a tiny hole in my brother’s flesh that does not bleed. I swallow hard. My hands are shaking badly.
That means he didn’t suffer, a voice whispers in my head. He did not even have time to pull it out before he was gone to wherever it is he went to.
Oh God! He is nineteen. He can’t be gone.
CPR. I should give him CPR. There must be something I can still do. I grab his shoulders and try to drag him across my thighs, but his body is so heavy, so cold, and so stiff and foreign that my shocked hands fly away from his shoulders as if they have touched fire. I gaze at him as he lies unmoving. The blood that ran without rest during his short life has stilled within his veins. Everything has cooled and hardened. He is like a piece of wood.
With a sob of intolerable, indescribable anguish I reach for him and with every ounce of my might I drag his cold, dead weight toward me and lift it onto my lap. I touch the soft brown hair that flops across his forehead and it feels different. His scalp has hardened and changed the lie of his hair. I caress his hair, his face, his hands. Holding his head pressed against my stomach I close my eyes and begin to rock him the way a mother would comfort her distressed baby.
But there is no comfort—his head is a hard, unfamiliar weight and the action produces an odd thud made by his stiff hand repeatedly hitting the floor. I stop. In a daze I look down on his face.
His mouth is open, the tongue—a strange, dull color—is pushed against his teeth. Without the healthy sheen of saliva it looks gross. I try to close his mouth, but it is locked open. His eyes are not fully shut and through the slits I see the whites. I try to lift a lid to see once more the beautiful blue eyes I have known all my life.
If I could at least see that.
But his eyelids are glued shut. They will not budge. Tremors shoot through my hand as I still the gruesome desire to force his eyelid open. When we were young we used to lick the salt from each other’s skin. I am suddenly filled with the strange desire to lick his skin.
I put one hand under his head and the other under his neck and I put his head on the floor. Then I scoot backwards until I am on my hands and knees and my face is hovering inches away from his. My head moves downwards. My tongue comes out. Inches away a voice in my head urgently cries, ‘No.’
I stop and listen to peculiar silence around us. It is quieter than falling snow. On the table top I notice his fingerprints in the light layer of dust, and then something weird happens. For a second I clearly perceive myself not from inside my body but from outside, crouched over my dead brother, more animal than human. I recoil from the sight. And then the moment is gone and I lower my head and lick the last salt on the corpse’s skin.
It is the beginning of my descent into an unfamiliar territory. A place you might call madness.
I’m afraid my stay was excruciatingly long.

‘Come here.’
I go to him and climb into his lap. His hands come around me, the palms hot. I nuzzle him like a cat, my hand stroking his thick hair, straightening it. It is ruffled. He has been running his hands through it. He takes my shoes off and lets them drop with a thud on the floor. I sigh with pleasure when his big hands start massaging my foot.
‘I didn’t know where you were. If you had simply run away. I know so little about you.’ His voice is a deep, honeyed rumble. It has a song in it. I could listen to it all my life. But I won’t. I was fooling myself before.
‘I didn’t run away. I’m here.’
The hardness between his legs pushes into my hip. I look up into his eyes. There is only one word for what is in them: hunger. I have never seen such extreme desire, such ravenous craving. The air trembles with it. A voice inside my head cries, ‘What have you done? What have you done?’ I ignore it. My body loses its tiredness and responds to that yearning. My lips part, my nipples swell and pebble tightly, my sex opens like a night flower.
‘Would it be really horrible if we had sex right now?’ he murmurs.
‘Yes, that would be utterly, utterly horrible.’
He carries me to the bedroom and kicks the door open. The large chandelier is not lit. Instead only the narrow bronze lamps over the paintings on the walls are on, creating their own individual pools of yellow light, making the paint look thick and oily. I glance at the bed and my mouth opens with astonishment. I turn back to look at his face. ‘What the—?’
‘Indulge me,’ he says languidly. 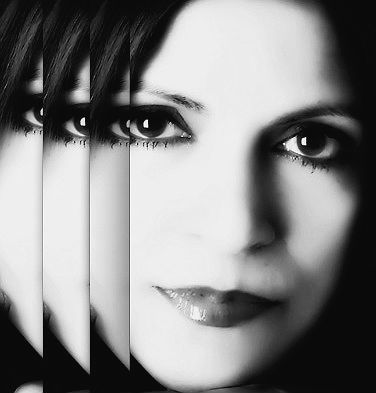 Georgia Le Carre lives in England, in an old 19th century romantic cottage surrounded by a magical garden filled with fruit and walnut trees.
When she is not feeding words into her laptop, she is either curled up in bed with a box of chocolates and a good read, or lost in a long walk in the woods. Especially on moonlit nights. And often with the man of her dreams.