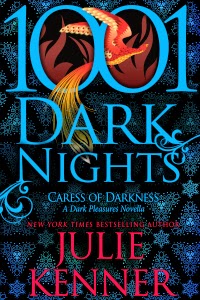 From the first moment I saw him, I knew that Rainer Engel was like no other man. Dangerously sexy and darkly mysterious, he both enticed me and terrified me.

I wanted to run–to fight against the heat that was building between us–but there was nowhere to go. I needed his help as much as I needed his touch. And so help me, I knew that I would do anything he asked in order to have both.

But even as our passion burned hot, the secrets in Raine’s past reached out to destroy us … and we would both have to make the greatest sacrifice to find a love that would last forever.
This is part of 1001 Dark Nights

Amazon US – Amazon UK
Add Caress of Darkness to your Goodreads list!

But I can’t get the words out, and I feel the tears snaking down my cheeks, and dammit, dammit, dammit, I do not want to lose it in front of this man—this stranger who doesn’t feel like a stranger.

And then his grip on my shoulders tightens and he leans toward me.

And then—oh, dear god—his lips are on mine and they are as warm and soft as I’d imagined and he’s kissing me so gently and so sweetly that all my worries are just melting away and I’m limp in his arms.

“Shhh. It’s okay.” His voice washes over me, as gentle and calming as a summer rain. “Everything’s going to be okay.”

I breathe deep, soothed by the warm sensuality of this stranger’s golden voice. Except he isn’t a stranger. I may not have not met him before today, but somehow, here in his arms, I know him.

And that, more than anything, comforts me.

Calmer, I tilt my head back and meet his eyes. It is a soft moment and a little sweet—but it doesn’t stay that way. It changes in the space of a glance. In the instant of a heartbeat. And what started out as gentle comfort transforms into fiery heat.

I don’t know which of us moves first. All I know is that I have to claim him and be claimed by him. That I have to taste him—consume him. Because in some essential way that I don’t fully understand, I know that only this man can quell the need burning inside me, and I lose myself in the hot intensity of his mouth upon mine. Of his tongue demanding entrance, and his lips, hard and demanding, forcing me to give everything he wants to take.

But it isn’t until I realize that he has pulled me into his lap and that I can feel the hard demand of his erection against my rear that I force myself to escape this sensual reality and scramble backward out of his embrace.

“Callie—“ The need I hear in his voice reflects my own, and I clench my hands into fists as I fight against the instinct to move back into his arms.

“No.” I don’t understand what’s happening—this instant heat, like a match striking gasoline. I’ve never reacted to a man this way before. My skin feels prickly, as if I’ve been caught in a lightning storm. His scent is all over me. And the taste of him lingers on my mouth.

And oh, dear god, I’m wet, my body literally aching with need, with a primal desire for him to just rip my clothes off and take me right there on the hard, dusty floor.

He’s triggered a wildness in me that I don’t understand—and my reaction scares the hell out of me.

“You need to go,” I say, and I am astonished that my words are both measured and articulate, as if I’m simply announcing that it is closing time to a customer.

He stays silent, but I shake my head anyway, and hold up a finger as if in emphasis.

“No,” I say, in response to nothing. “I don’t know anything about this amulet. And now you really need to leave. Please,” I add. “Please, Raine. I need you to go.”

For a moment he only looks at me. Then he nods, a single tilt of his head in acknowledgment. “All right,” he says very softly. “I’ll go. But I’m not ever leaving you again.”

I stand frozen, as if his inexplicable words have locked me in place. He turns slowly and strides out of the shop without looking back. And when the door clicks into place behind him and I am once again alone, I gulp in air and feel the warm trickle of a tear as it snakes down my cheek.

I rub my hands over my face, forgiving myself for this emotional miasma because of all the shit that’s happened with my dad. Of course I’m a wreck; what daughter wouldn’t be?

Determined to get a grip, I follow his path to the door, then hold onto the knob. I’d come over intending to lock it. But now I have to fight the urge to yank it open and beg him to return.

It’s an urge I fight. It’s just my grief talking. My fear that I’m about to lose my father, the one person in all the world who is close to me, and so I have clung to a stranger in a desperate effort to hold fast to something.

That, at least, is what my shrink would say. You’re fabricating a connection in order to fill a void. It’s what you do, Callie. It’s what you’ve always done when lonely and afraid.

I nod, telling myself I agree with the voice in my head.

Because I am lonely.

And I am afraid of losing my dad.

But that’s not the whole of it. Because there’s something else that I’m afraid of, too, though I cannot put my finger on it. A strange sense of something coming. Something dark. Something bad.

And what scares me most is the ridiculous, unreasonable fear that I have just pushed away the one person I need to survive whatever is waiting for me out there in the dark.

When you got right down to it, that was the bottom line. Raine wanted Callie Sinclair. Craved her. Hungered for her.

Hell, he fucking yearned for her, and that was simply not a feeling he was used to having. Hadn’t been for a very, very long time.

Oh, sure, he’d gotten off often enough. Lost himself in a women. In the feel of her body against his. There was power in the claiming of a willing female, in that hard, rough ride that erased the world, at least for those few singular moments as the sensation built and climax approached.

And when the inevitable explosion came, he’d lose himself in the sharp oblivion that mimicked the death he sought again and again, and yet this death was forged in pleasure and not pain.

But that was all he wanted or needed—just that physical connection to remind him that no matter how dead he might feel on the inside—no matter how hard he chased that escape and no matter how many times he burned—this body still functioned and he still had a job to do.

He ran his fingers over his close-cropped hair and told himself to get a grip. An ironic lecture since he stood like a criminal in the shadows across the street from Sinclair’s Antiques, his eyes trained on the now-locked door.

Thank goodness he’d dismissed Dennis, Phoenix Security’s driver, telling him to go ahead and simply be on call in case Raine needed him later. He hardly wanted to explain to the eager twenty-three year old why the hell he was standing like an idiot, waiting for just another glimpse of this women who’d gotten so deep under his skin.

Christ, he was pathetic. For millennia he’d not been distracted by a woman. Not since he’d lost Livia, his mate.

Oh, he’d fucked plenty, but that was to escape. Because even after all these centuries he still craved what he’d lost when she’d been ripped from him.

He’d loved her beyond all reckoning, and never once had he believed that he would ever feel that same connection with another female.

And yet this woman — Sinclair’s daughter — not only caught his attention, but sparked his awareness.

He told himself that he was simply attracted to her beauty. That he hadn’t brought a woman into his bed for over a year. A short time for a man such as him, but still too damn long.

He told himself that he just wanted to fuck her—but that wasn’t true at all.

He wanted have her.

And that’s why he was standing here in the dark.

That’s why he was watching her door.

And that’s why the moment she left the building, he was going to follow her—all the way to wherever the hell that might lead. 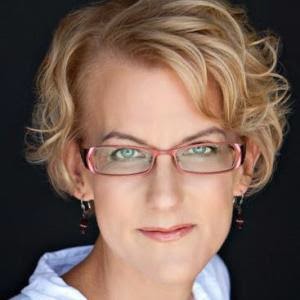 J. Kenner (aka Julie Kenner) is the New York Times, USA Today, Publishers Weekly, Wall Street Journal and International bestselling author of over seventy novels, novellas and short stories in a variety of genres. Though known primarily for her award-winning and international bestselling erotic romances (including the Stark and Most Wanted series) that have reached as high as #2 on the New York Times bestseller list, JK has been writing full time for over a decade in a variety of genres including paranormal and contemporary romance, “chicklit” suspense, urban fantasy, Victorian-era thrillers (coming soon), and paranormal mommy lit. Her foray into the latter, Carpe Demon: Adventures of a Demon-Hunting Soccer Mom by Julie Kenner, has been consistently in development in Hollywood since prior to publication. Most recently, it has been optioned by Warner Brothers Television for development as series on the CW Network with Alloy Entertainment producing. JK has been praised by Publishers Weekly as an author with a “flair for dialogue and eccentric characterizations” and by RT Bookclub for having “cornered the market on sinfully attractive, dominant antiheroes and the women who swoon for him.” A three time finalist for Romance Writers of America’s prestigious RITA award, JK took home the first RITA trophy awarded in the category of erotic romance in 2014 for her novel, Claim Me (book 2 of her Stark Trilogy). Her books have sold well over a million copies and are published in over over twenty countries. In her previous career as an attorney, JK worked as a clerk on the Fifth Circuit Court of Appeals, and practiced primarily civil, entertainment and First Amendment litigation in Los Angeles and Irvine, California, as well as in Austin, Texas. She currently lives in Central Texas, with her husband, two daughters, and two rather spastic cats.
Website – Twitter – Facebook – Pinterest – Instagram – Tumblr – Goodreads