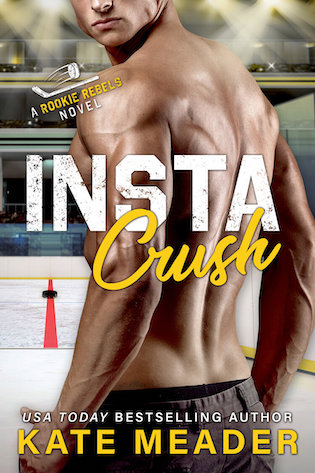 
Theo Kershaw is the luckiest guy alive.
Roaring back from a life-threatening injury, he has the world at his skates as defenseman for his new team, the Chicago Rebels. Everyone adores his big personality, his on-ice talent, and his killer smile. Everyone but his prickly neighbor – or so he thinks. One chilly Christmas Eve, Theo will learn that maybe the girl next door isn’t such a hater after all …
Elle Butler is the most embarrassing person on the planet.
How else can the ex-military-now-bartender explain her crush on the hot jock who lives across the hall? True, he has gorgeous green eyes and perfect cheekbones, but the filter between his brain and too-sexy mouth is permanently malfunctioning. Yet she can’t stop checking out his Instagram antics or sneaking looks at him when he’s in her bar. So. Mortifying. Running from a past filled with damning secrets, Elle’s determined that this guilty pleasure remains buried in her deepest fantasies.
Because she couldn’t possibly indulge with the Theo Kershaw or make a mistake that draws attention to her under-the-radar life. And she especially couldn’t be a mom to a pro-athlete’s baby … could she?

Goodreads / Amazon / Barnes & Noble / iBooks / Kobo / Google Play
—
EXCERPT:
“Yes, I’ve seen those billboards for your underwear.”
“Fender bender when you did, right?”
“Oh, I have epic self-control. But seeing them made me realize that you’re a bit too pretty. I kind of like ’em rougher.” She placed a finger under his chin and tilted it for inspection. “You ever get into a fight? And I don’t mean those phony ballets you perform on the ice for your fan base.”
“I’m more a lover than a fighter.”
She scoffed, reluctantly withdrawing her touch. “Thought as much. Wouldn’t want to risk getting that perfect nose broken.”
He didn’t take offense. She wondered what in the world would ever bother The Theo Kershaw.
“So we’ve established I’m not manly enough for you. Any other comments?”
“Oh, I’d never be one to criticize.”
He waved a hand. “Help me out, Elle-oh-Elle. Give me some pointers on how to win a real woman such as yourself.”
She thought about it for a moment, her blood fizzing with the fun of sparring with him. “You’d need to be a completely different person. But don’t fret, your current vapid personality is probably cleaning up so don’t change a thing, ’kay?”
He didn’t look put out, probably because her jab carried no heat. They both knew she wouldn’t be talking to him like this if she really believed he was dumb and vain.
“Yeah, good thing I’m doing okay. It’s just you’re here and I’m here …” The implication being that only proximity would force him to lower his standards.
She patted his chest and suppressed a groan at how hard it felt under her fingertips. “I know you can’t help yourself. You’ve got a penis that seeks out the nearest vagina like a diving rod. It’s really not your fault.”
“True. I can’t be held accountable for my incorrigible flirting.”
He grinned and she grinned back, and that fizz in her veins bubbled bright. He’d figured out her game, matched her quip for quip. They understood each other and now they were … friends?
How odd.
And surprisingly sweet.
Theo Kershaw was smarter than he looked. Confusion must have registered on her face because he seemed to be closer, more present. A rush of awareness overtook her, not just of him, but of them and the sparking connection being formed in this sizzling moment, more powerful than mere sexual attraction.

Author Bio:
Originally from Ireland, USA Today bestselling author Kate Meader cut her romance reader teeth on Maeve Binchy and Jilly Cooper novels, with some Harlequins thrown in for variety. Give her tales about brooding mill owners, oversexed equestrians, and men who can rock an apron, a fire hose, or a hockey stick, and she's there. Now based in Chicago, she writes sexy contemporary romance with alpha heroes and strong heroines who can match their men quip for quip.