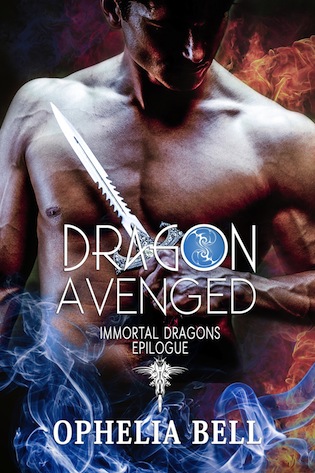 The indulgently sexy epilogue of the “Immortal Dragons” series is here!
A year has passed since the explosive conclusion of the Dragon Council’s quest to find their mates and destroy their mortal enemy. The world of the higher races is on the verge of a dangerous shift. The dragons have one more ritual to undertake to ensure their secrets are kept and the human world remains oblivious to their presence. One woman is the key to their safety.
With powers and a bloodline no other creature in existence possesses, Deva Rainsong is finally on the verge of understanding her purpose. She must cast the spell required to reach all the humans tainted by the enemy, even if it comes at the expense of her innocence. But Deva’s nature craves a true awakening, and her rapture might just be the thing that saves them all.

Goodreads / Amazon / Barnes & Noble / iBooks / Kobo
—
EXCERPT:
Numa gazed up at Dion, curious. “You already have a plan, don’t you? Do you have enough power to control the entire bloodline?”
Dion smiled bitterly. “Potentially, but that would be the wrong approach. Meri’s methods of mind control are not what I wish to employ to handle this challenge. There is the added complication of the mutations many of the humans possess. The bloodline is as varied as Deva’s, though none of the humans with it possess more than a few drops of divine power, thanks to their link to me. And they all have souls. Attempting to meddle with them unwillingly could corrupt them.”
Numa pursed her lips, following the thread of Dion’s thoughts. Meri’s creation of the Ultiori had involved infusing humans with the blood of the higher races, her own in particular. Once her puppets interbred, that blood, along with Meri’s nymphaea blood, was passed down the generations for thousands of years, their numbers increasing to the millions. It had allowed Meri access to immense power at the end, a power that had nearly cost them control of the Source. If Dionysus hadn’t intervened, Meri could have beaten them. Now their biggest worry was being discovered by all of humanity, which had its own set of complicated drawbacks. They couldn’t treat this issue lightly.
“But you have the power to reach them, right?” she asked.
“Yes. I can sense all the souls attached to the bloodline, but I can’t affect them on my own. I would need power from all five races to do that, and a conduit through which to channel the power—someone with a link to all the races too.”
“Not a fucking chance.”
Numa’s gaze shot to Cade, who had spoken. The big blond ursa shook his head and scowled.
“Cade, you don’t even know who would possess that kind of link.”
“The hell I don’t. You know as well as I do it’s Deva he’s talking about. The poor girl’s been through enough the past year, being shuttled around like precious cargo between all the higher realms, never once allowed to get her feet under her. Now you want her to be the apex of some sex ritual. She isn’t ready.”
“He never said . . .” Numa objected, but Cade interrupted her with a laugh.
“Sweet pea, you think I don’t know how this works? Anything that involves our magic—especially dragon or nymphaea magic—requires someone getting fucked. If it were any one of us, I’d be all over it. The five of us together brought enough power to win a fucking war. But we’ve got experience under our belts. Eons of it between us. Deva may look old enough—she may be wise beyond her years after living with the gods while we won that war—but she’s still a baby, and I guarantee none of her parents are going to sign on, either. Find someone else.”
She turned a worried gaze to Dion. “He’s right. There has to be someone else who can do it. Meri experimented on thousands. We should at least talk to Neph and Nyx about it, don’t you think?”
“You forget I am linked to all the potential options, little one. If they were tainted by Meri’s blood, they are now part of my bloodline. That includes your brother, who was Meri’s first. Yes, I can sense him with Neph and Vrishti and their new daughter in the Sanctuary, though his blood meld to my son is a stronger link. I agree we should open up the conversation to the others when they arrive, but if there was any other option, I would know.”

Author Bio:
Ophelia Bell loves a good bad-boy and especially strong women in her stories. Women who aren't apologetic about enjoying sex and bad boys who don't mind being with a woman who's in charge, at least on the surface, because pretty much anything goes in the bedroom.
Ophelia grew up on a rural farm in North Carolina and now lives in Los Angeles with her own tattooed bad-boy husband and four attention-whoring cats.
If you'd like to receive regular updates on Ophelia's publications, freebies, and discounts, please subscribe to her mailing list: http://opheliabell.com/subscribe/