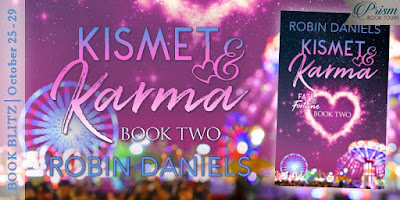 Learn more about this YA duology, about its characters, and enter the giveaway below... 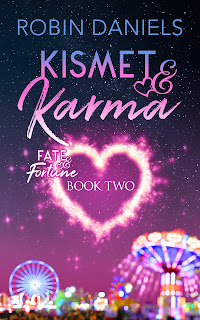 Bryce and Paige belong together, but they’ll never make it happen alone. When inspiration strikes in multiple ways, a friend decides it can’t be a coincidence; it’s a call to action. With a little luck, the help of fate, and the matchmaking plan of the century, Bryce and Paige just might get their happy ending.

You heard Paige and Bryce's version of the story in Fate & Fortune. Now join Eric, Amy, Cody, Kennedy and Genie to see how things really went down.

***This book completes the series. Book one can be read as a standalone, but book two cannot. Fate & Fortune should be read first.***

The Cast of Kismet & Karma

Meet the cast of Kismet & Karma – personalities revealed through their astrological signs!

Paige – Taurus (April 24th) Paige proved her reliability, patience and devotion during her relationship with Jason. Like a true Taurus, she hates the sudden changes and complications in her love life. Pair that with her stubborn streak, and it’s no wonder she needs help to recognize what’s right in front of her; a gift in the form of her greatest passion—novel worthy romance.

Bryce – Virgo (September 15th) As a Virgo he’s loyal, kind and hardworking. He’s always thought his practicality and desire to stay out of the spotlight were good things. But now he wonders if they’ve only kept Paige from noticing him. Bryce has started to realize that if he wants to get the girl, he must cast aside his careful nature. Good thing he has a magic Genie to help him do just that.

Amy – Aquarius (February 11th) She’s original, independent, a good listener and cares deeply about others. This makes her a great best friend and the only voice of reason Paige will listen to. But Amy’s also inherited some of the less attractive Aquarius attributes; namely her tendency to be temperamental and emotionally withdrawn. Lucky for Amy, there’s a special guy who’s crazy about her, flaws and all.

Eric – Scorpio (November 12th) Eric is a true friend. It’s one of the many positive traits held by Scorpios. He’s passionate, dedicated, resourceful and determined to help his baby sister. Of course, that might be easier if he wasn’t so distrusting and secretive. Let’s not forget the fact that he’s a tinsy bit jealous by nature. But hey, some women find that sort of thing attractive. And if that’s not enough, he’s got those dazzling dimples for backup.

Kennedy – Leo (July 31st) Ken’s a Leo, through and through. She loves theater, hanging with her friends, expensive clothes and being admired. But as the baby of the group, she often feels ignored or left out. It’s her absolute biggest pet peeve. Ken’s admittedly a little self-centered though she’s got a big, warm, generous heart. Fate will soon put her creativity and passion to good use, and she’s all for it.

Cody – Sagittarius (Despite his September 15th birthdate.) Clearly, Cody was born under the wrong sign. Extremely extroverted, he’s the total opposite of his very Virgo twin—definitely an honorary Sagittarius. Cody’s constant antics and humor are charming, which makes the group willing to overlook his impatient and sometimes tactless ways. Optimistic and enthusiastic, he’ll do anything to achieve his goal: getting Bryce to pull his head out of his butt and man up.

Genie – Aries (April 1st) As an April Fools baby, it’s fitting that Genie be the most essential part of such an outrageous plan. But like all Aries, she’s confident and optimistic that she can get the job done. Frustrated by people who don’t use their talents, she jumps at the chance to showcase her own. Sure, Bryce often brings out her aggressive, moody and impatient side, but she likes a good challenge. Plus, who’d have thought she’d gain so many good (and hot) friends?

This cast is super fun and you’re sure to get some good laughs. Fate and Fortune (Book One) shares the crazy week the as told by Paige and Bryce. But if you want the REAL story, check out Kismet and Karma (Book Two) to see how everything actually went down. 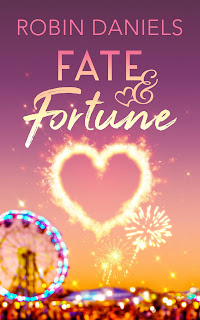 Bryce has liked Paige since they were little but has never had the guts to act on his feelings. Paige is devastated over being dumped by her long-time boyfriend and can’t seem to move on. They’re stuck in a rut, until fate decides to pull them out.

Both Paige and Bryce are talked into seeing a fortune teller at the annual Summer’s End Carnival. Neither of them buys into the mysticism, until the psychic’s predictions start coming true. Now, the most bizarre things are happening and there isn’t a clear explanation. Each of them must figure out if they’re the subject of an elaborate hoax or a bigger plan forged by destiny.

*This book is part one of two. Books should be read sequentially. 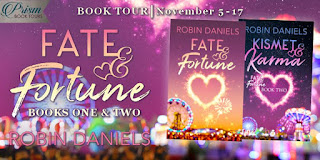 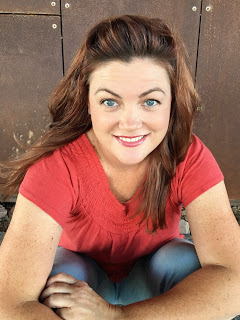 The most important thing to know about me is that I'm basically a sixteen-year-old trapped in an adult's body. It's why I feel such a great connection to all of my characters and why I love to write romantic comedy. The kid in me just wants to be goofy. Besides being a writer; I'm a wife, mother of five, volleyball enthusiast and home decorating guru. My list of favorites includes: reading, Christmas, pedicures, dessert, steak, Arizona winters and most importantly, Diet Coke. 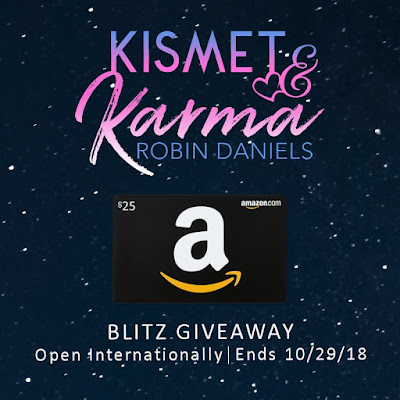