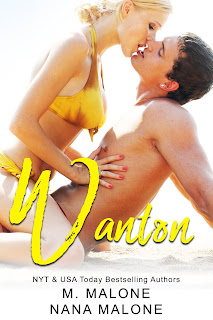 
After getting dumped, the last thing Trevor Hamilton wants is to take on his advisor’s niece as a new roommate. For starters she’s hot. Like sexy librarian hot. But he needs his advisor’s recommendation for a job after he graduates, so he’s going to keep his dirty little fantasies to himself… and stay far away from his sexy little roomie.

Natalie Washington is done with men. After her last dating disaster, she can’t afford to get derailed again. So when her aunt claims to have found her the perfect roommate, she’s willing to give it a shot. He’s one of her aunt’s best students, so how distracting could he be?

Then Trevor opens the door to their apartment, muscled, shirtless, tattooed and so… arrogant. How can one guy be such a dick? He’s bossy, and annoying...and scorching hot. Too bad he knows it.

As the battle lines get drawn, they’re each determined to ignore, or annoy, the other. Who will end up on top?

Available at the following retailers today only!

NYT & USA Today bestselling author M. Malone lives in the Washington, DC metro area with her husband and their two sons. She holds a master's degree in Business from a prestigious college that would no doubt be scandalized by how she's using her expensive education.

Independently published, she has sold more than 1/2 million ebooks in her two series, THE ALEXANDERS and BLUE-COLLAR BILLIONAIRES. Since starting her indie journey in 2011 with the runaway bestselling novella "Teasing Trent," her work has appeared on the New York Times and USA Today bestseller lists more than a dozen times.

She's now a full-time writer and spends 99.8% of her time in her pajamas.

USA Today bestselling author Nana Malone's love of all things romance and adventure started with a tattered romantic suspense novel she "borrowed" from her cousin.

It was a sultry summer afternoon in Ghana, and Nana was a precocious thirteen. She's been in love with kick-butt heroines ever since. With her overactive imagination constantly channeling her inner Buffy, it was only a matter a time before she started creating her own characters.

While she waits for her chance at a job as a ninja assassin, Nana works out her drama, passion and sass with fictional characters every bit as brazen and kick-butt as she thinks she is.